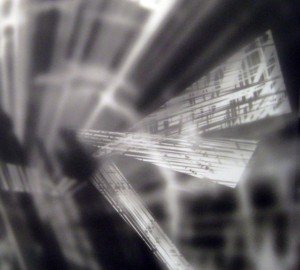 Having invented the “lumetype”—a new variation on the photogram in which light is chemically generated between an object and the photo-sensitive paper to which it is applied—gallerist-curator Caro d’Offay proceeded to invite twelve artists to experiment with the process as they saw fit, either with ordinary things or their own creations. Whether the subject is a fabrication, like a razor-scored page from an old notebook, or a familiar object like a spool of thread, the lumetype is always a dynamic and pure abstraction tending toward bold expressionism in black and white. The “sandwich” approach to lighting is what makes the lumetype vibrant, placing it at the opposite end of the spectrum from the traditional back-lit photogram in which subjects float immobile in the ether. JL Murtaugh does it best when he transforms a layered confection of paper and acetate daubed with phosphorescent paint into a whirling wheel of fine-spun luminosity that is guaranteed to hypnotize. (Michael Weinstein)