Edra Soto’s exhibition, “The Greatest Companions,” currently showing at Bridgeport’s Mutherland gallery, examines the changing portrayal of Latino women in mainstream culture, culling imagery from the artist’s childhood memories of watching television star Iris Chacon in her native Puerto Rico during the late 1970s and eighties. Chacon takes center stage in Soto’s memory and exhibition. A series of original gouache paintings is rounded out with various memorabilia including a video clip of the star from the variety show “El Show de Iris Chacon.”

What originally drew Soto to Chacon was the star’s strength. “Iris is both a mother figure and a dominatrix,” says Soto. “But nowadays, Latino women on TV utilize their bodies as sexual objects, nothing more. My conclusion is that if a woman is going to represent her body, she should have a good excuse.” A singer, comedian and provocative yet untrained dancer, Chacon powerfully exhibited her untamed sexuality, with a stable of male dancers as supportive sidekicks. “She was commanding,” notes Soto. “She was the boss on the show, and the guys were dancing with her for her benefit. But now, the girls are just decorations on the [Latino] shows, which is so ironic.”

Soto recreates Chacon’s magic in “Painting #1,” which shows the Chacon dancers in fruit costumes (modeled after an actual episode) and a self-portrait of the artist, smiling in a motherly way upon her subjects. By inserting herself into the painting, Soto channels her identification with Chacon (who she sees as her alter ego), while attempting to erase boundaries between the sexes. “Despite the fruit costumes, nobody is inferior in this case,” says Soto. “We’re just enjoying it. When I saw that dance [clip], I realize the dancers weren’t humiliated, it’s just part of that era.”

As in many of the paintings in Soto’s exhibit, the male Chacon dancers appear as friendly, animal-like creatures. In two paintings of Soto disguised as Chacon, a dog and a cat, respectively, perch protectively on her shoulders, modeled after the artist’s own pets. Soto, who was diagnosed with uterine cancer in October 2007, began painting the Chacon series in early 2008, following a hysterectomy. “My dog became my greatest companion when I was sick,” Soto explains. “When I saw these [Chacon] images, it was an opportunity to express how I felt in regards to the relationship between women and animals.” 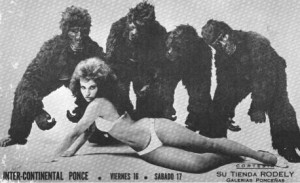 A 1983 Chacon newspaper clipping from the Puerto Rican newspaper, El Reportero, which Soto found and bought from eBay, originally inspired the artist to draw a link between her love for animals and the admired singer of her childhood. In the clipping (an exhibit in the show), attentive, friendly gorillas surround the voluptuous yet powerful Chacon, lying on her side sexily in a miniscule bikini. “The men [in the paintings] transform into animals because it’s my world,” states Soto. “It wouldn’t be men or people in my world, it would be animals, because they contain an unconditional love that doesn’t exist anywhere else.” (Marla Seidell)