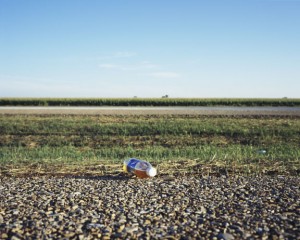 In this Kerouac-inspired show, artists respond to, and push the boundaries of, the travel narrative. In a cohesive mix of audio, photography, video and paintings, several artists offer their interpretations of Jack Kerouac’s influential work, “On The Road.”  The original manuscript, a 120-foot typewritten scroll, can be viewed at Columbia College. Photographers Greg Stimac and Jason Lazarus provide immediate accessibility with their work, taking direct influence from the novel. Stimac’s series “Bottle of Piss” represents Kerouac’s method of relieving himself while traveling. Stimac, a photographer who takes to the road to complete portraits of Americana, states, “My car at times becomes my studio.” Similarly, Lazarus’ “Dead Bug” presents the visual through a windshield that any traveler can identify with. The mixed-media art provided by Jeff Gabel, Dylan Strzynski, and Diana Guerrero-Macia offer a less direct connection to the novel, but tie in major themes of narrative and the process of journey. Strzynski’s mixed-media paintings are full of detail and color. Gabel’s series of sketches are rough, but designed as self-contained narratives that read like diary entries. Guerrero-Macia’s use of found objects creates a new perspective on the expendable. Selections from The Third Coast International Audio Festival thoroughly round out the exhibit with narratives that are beautifully produced, episodic, intriguing and, at times, funny. The recorded conversations, titled “Julie and the Amtrak God” remind the listener that a journey can be personal, but also accessible. Kerouac would be proud. (Shama Dardai)