Around the Coyote’s Fall Festival, the yearly multi-disciplinary arts fair, now in its nineteenth year, took place outside of its Wicker Park home, near Union Park, in hopes of introducing a new image and reaching more diverse audiences. The weekend-long event featured theatrical productions, music and literary readings, but the core of its activities centered on the visual arts, this year curated by Allison Peters Quinn, of Hyde Park Art Center, and returning film and video curator Catherine Forster. About 130 artists exhibited their stuff, predominately wall art—painting, drawing and photography. 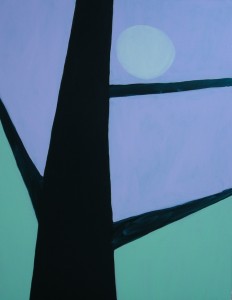 Peter Hoffman's "Tree and Moon" at the Fall Festival

A few standouts included Wendy Kveck’s “found object vomitoriums,” small canvases that actively oozed their material into buckets below. Whipped marshmallow slowly dripped beside oil paints squeezed through fluted icing tips of the cake-decorator variety. Titled “How Much Do You Really Need?” they play with notions of over-consumption, and also answer the action-painter’s quandary: they never stop performing their own making. Elsewhere, Steve Twardowski photographed vernacular office interiors, capturing the feeling wrought by bad lighting, indoor plants and lumpy couches. To boot, most pictures themselves featured office art, that bland and inoffensive brand of decoration. Julia Kuhl’s business cards are little collector’s items, each one an orphan from some lost deck of German tarot cards with enigmatic imagery. Likewise, multimedia artist Ryan Scheidt created artist playing cards with portraits of every artist in this year’s festival, in addition to his wondrous and colorful paper sculptures.

A thematic current washed through the fair’s artists, notably a penchant for depicting the city and its inhabitants—friends in soft sunlight, house cats on wood floors, some gritty architectural realism and some kids riding bikes. Combined, it was a slice of the city’s art scene rarely seen, as most on view here are not represented by galleries.

The West Town/Union Park area is now home to two printmaking collectives, Spudnik Press and The Post Family. Spudnik Press gives classes on printing processes such as silk-screening and etching, has a residency program for artists and hosts an open studio. The Post Family is a group of printmakers and designers. The opening of their studio this weekend provided an opportunity to see all the stuff that serves to inspire, from vintage lamps and tracksuits to letterpress typography. Both spaces have exhibition spaces and bubblegum machines (Spudnik’s has tiny prints and the Post Family sells buttons by noted local artists).

Spudnik Press and The Post Family are both located at 1821 West Hubbard. 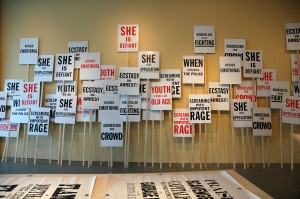