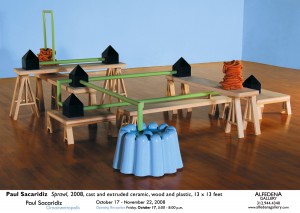 The ceramic sculptures by Paul Scaridiz featured in “Ornamentropolis,” and the acrylic paintings by Steven Heyman in “Beacons,” both on view at Alfedena Gallery, complement one another rather well. In each exhibition, the focus is on reconciling a sense of time and place: whether in Sacardiz’s fictitious model cities constructed from porcelain and wood, or the more ethereal mind space characterized by Heyman’s abstract paintings, each artist offers the viewer a sophisticated dialogue on the nature of constructed and internal realities. In “Ornamentropolis,” Sacaridiz offers a glimpse of the constructed world as microcosm, transforming various architectural histories into hyper-real structures. The result is the creation of an elegant schema of pattern recognition in urban spaces. Conversely, Heyman’s paintings revel in atmosphere, and the minimal iconography frequently recalls the ambient cosmos of noted influence Brian Eno.  Like Eno, Heyman has the ability to paint the “formless” using a viewer’s psyche as a palette through rather basic shapes and formal arrangements. It’s hard to say why the peaceful minimalism of “Beacons” is so gripping and touching, but it’s a testament to a lifetime spent studying the language of non-objectivity that the paintings pack such an emotional wallop. Though a far-off sense of idealism develops (does transcendence always have to be so sweet, calming, and innocent?), most of Beacon’s  work has its heart in the right place. (Steven Wirth)