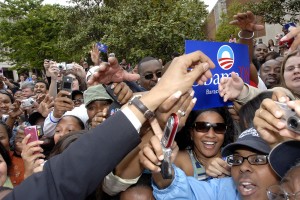 Supporters extend hands and cell phone cameras toward Barack Obama as he preaches his message of change. An arranged multi-ethnic array of young adults yawn and stare blankly at a rally for the next great chapter in American history. Protesters in Guantanamo-orange jumpsuits, bags over their heads, kneel in a line outside the Federal Courthouse in Denver during the 2008 Democratic National Convention.

“My photos are a bridge between photojournalism and art,” says Davis, who has covered every presidential election since 1996. “I like to document what’s going on, but also put out a sort of anti-propaganda of the political process. I have a political agenda.”

Not that Davis’ photography is particularly right or left wing. He skewers the way candidates shift through the campaign, dilute messages and “prostitute themselves” as corporate donors fork over hundreds of millions of dollars. Behind the pomp, Davis shows oft-overlooked stories, emotions and demoralization.

Davis’ most affecting images capture police brutality toward protesters during both party’s conventions. The faces of Eric Gidcumb and Clayton McKee are shown with bruises and gashes on their faces after being beaten by police during the Democratic National Convention. Outside the Republican National Convention, a medic treats a woman after police sprayed her in the face with pepper spray. To his knowledge, the photographed protesters were peaceful and were not charged with crimes, Davis says.

“To be fair, a small number of protesters were more violent,” says Davis. “But this was overkill. Political protest is a vital part of democracy.”

Aside from the irony of free speech violations at an event celebrating the democratic process, other images display a campaign of intense passions. Some challenge preconceived notions of Washington celebrity.

A day-old wall mural of Obama is marred by a graffiti swastika, with eyes crossed out. Sarah Palin’s teleprompter bodes of the ever-present threat of Al Qaeda, as another photo of her shows her giving a stiff, right-armed wave. Although usually seen as a genial, commanding figure, former president Bill Clinton scowls with jaw clenched and eyes focused off to the side. In contrast to their official glamour at the Republican convention, Former President George H.W. Bush and his wife Barbara are shown frowning, with age resting in their bored expressions.

“Each photograph has a story lurking under the surface,” says Davis. “People will take what they want away from it.” (Ben Broeren)