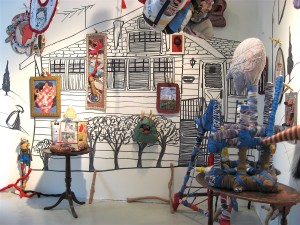 This Bridgeport gallery is crammed with recent works by Danny Mansmith, a mostly self-taught fiber artist whose drawings and objects are made with a sewing machine. There are dolls, collages and pictures using found materials such as Boy Scout merit badges, train tickets, those S&H “Green Stamps” people used to collect in order to save on groceries, and other scraps that Mansmith has salvaged over the years. Some of the pieces explore the relationship between thread and fabric, and line and ground, in an interesting way, like “Boiling Point” which shows a tumescent form emerging through a wooden frame. Mansmith does a lot of drawing with his sewing machine, not all of it very successful, but sometimes striking. “Left Behind” is a little tableau drawn with white stitching on a black ground, and framed inside a house-shaped doily, suggesting something traditionally American as well as evaporation by the Rapture. The sculptural pieces are modest but interesting. A few of them, like “Gingham Figure,” seem to be tree branches wrapped up tightly in thread, creating soft forms. “Red Arms” is a little mandrake bound up tightly in a mass of red thread in a way that suggests the obsessive compulsion of a spider wrapping up its prey. And this really is the impression one carries away of Mansmiths’s art: patient, obsessive, spider-like. (David Mark Wise)