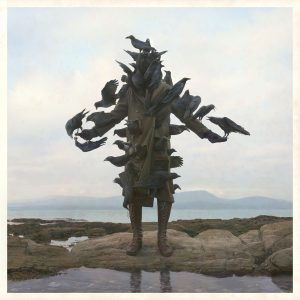 In an over-the-top plunge into invented visual history, replete with absurdity and hilarity and doubling as a cautionary tale, the photographic comedy team of Nicholas Kahn and Richard Selesnick serve up color panoramic scenarios documenting the “Iceberg Free State,” which they tell us was created in 1923 when an iceberg washed ashore near a Baltic town and was made a free-trade zone in the best tradition of rampant frontier capitalism. In their most shaggy-dog take, Kahn and Selesnick present their heavily clothed subjects playing an extravagant game of cards while the world around them transmutes into a battle field in wintry wastes. According to the artists, the “free state” met an untimely end, which can only make us laugh at greed and vanity until we remember that just recently Iceland was saved from bankruptcy due to grossly irresponsible lending practices by a Russian bailout loan. (Michael Weinstein)