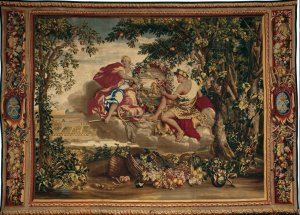 Beginning with McCormick, Deering and Field, Chicago’s wealthiest families have been donating tapestries to the Art Institute for more than a hundred years—so why is this the first time in living memory that most of these artworks are being exhibited? Because, as the museum tells us, “Some have viewed tapestries as mere copies of paintings or as little more than interior furnishings” (i.e. peripheral to the history of art). But now things are changing. In 1995, the AIC began to clean and restore its impressive collection and in 2002 the Metropolitan Museum in New York had “the first major tapestry survey in the United States in twenty-five years.” That show drew twice the predicted attendance and skyrocketed the career of its curator (who is now the Met’s director). So why are these old-fashioned heirlooms finally meeting with such success? Because they are so awesome, running from floor to ceiling, filling one glorious room after another with life-size heroes and gods who are perpetually tumbling out of their magical worlds and emerging into ours. And don’t forget the details—the designers didn’t—especially around the borders. Each enormous work could be cut into dozens of pieces, each of which could stand on its own as a delightful still-life or figure study. The earliest works, c. 1500, have the flat, magical, pictorial space of the Middle Ages, but most of these tableaux have the deep and voluminous space of the Renaissance and beyond, which can leave a viewer somewhat woozy since woven fabric cannot hold a straight line. Especially woozy, and especially exciting, is the complete fourteen-piece dramatic spectacle of Caesar and Cleopatra from the seventeenth century, and especially regal are the Gobelin “Seasons” made for Louis XIV. Let’s hope these magnificent things, now that they’re conserved, are trotted out more than just once per century. (Chris Miller)

The Divine Art: Four Centuries of European Tapestries shows at the Art Institute of Chicago, 111 South Michigan, through January 4.