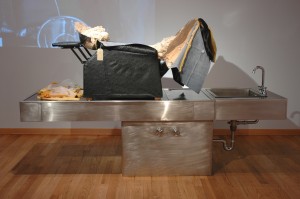 The gallery space at the International Museum of Surgical Science has been turned into a postmodern morgue: in one tin lie the remains of a man’s leather shoe, layers peeled back and pinned to the medical tray. Against the wall, a La-Z-Boy lies upon a metal table, its leather upholstery hanging like viscera from the reclined metal frame. Part of Jason Ferguson’s solo show, “CORPOreal,” these ‘remains’ elicit a puzzling series of emotions, from the bewilderment of such meticulous destruction to an overwhelming sense of decay and mortality—the bizarre sensation that humans are not so far removed from the inanimate objects we build our lives around. Satirical and morbid, these deconstructed installations are supplemented by mock-medical instruction films projected onto the wall. The footage, which features Ferguson executing his autopsies in procedures learned from professionals, adds depth to the installation that the mangled La-Z-Boy could not have provided on its own. It generates an unnerving awareness of the human body as a disposable item, one which is composed of an array of breakable, interconnecting parts. “CORPOreal” is an amusing show, well suited for the International Museum of Surgical Science and highly original without being outlandish, a remarkable feat once one remembers they are looking at lounge chair on the examining table. (Jaime Calder)