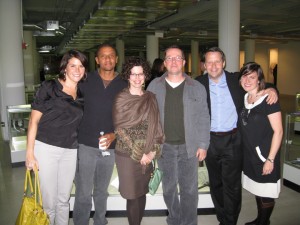 Artadia announced the winners of its 2008 Chicago artist grants. Juan Angel Chavez and Jim Duignan both won the top prizes of $15,000. Chavez’s “Speaker Project,” an interactive sound sculpture, was shown recently at the Hyde Park Art Center and is touring national art venues, and he is working on a larger, more fantastic sound piece. Duignan’s Stockyard Institute, a public art-education platform in Chicago, recently held workshops and events, also at the Hyde Park Art Center.

All Artadia grants are unrestricted, meaning the recipients can use the money in whatever way they see fit. No formal award ceremony is planned, but an exhibition of the winning artists’ work will coincide with Art Chicago in May, 2009. Artadia, a non-profit institution, awards cash grants to artists in Chicago, San Francisco, Boston, Atlanta and Houston. This year, three judges sifted through 650 Chicago-specific grant applications, pared it down to a short-list of fifteen artists, and selected the final seven from studio visits and interviews. (Jason Foumberg)

For images of the winners’ works, see the Artadia news webpage.