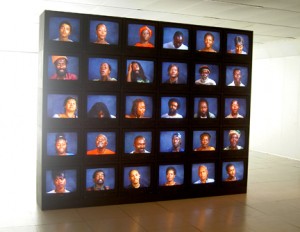 It’s pure coincidence that Berlin-based South African artist Candice Breitz is speaking at the Art Institute of Chicago on Election Day (November 4). Really, it is. Perhaps it’s fitting, however, because in her work internationally renowned Breitz discusses the phenomenon of “celebrity” across cultures, the impossible paradox of language as both a connecting and alienating force and the ubiquitous medium of video (and, thusly, video art) as a visual language—all concepts that pop up around the presidential race that the entire world is watching, nervously. After all, politicians are the biggest celebrities. I called the artist at her hotel room in New Orleans before she came to Chicago. Not surprisingly, I interrupted her watching election coverage.

How did you first become interested in the intersections between celebrity, fan culture and video art?

My interest in both video as a medium and celebrity as a matrix comes back to their function as lingua franca within our culture. You don’t need to be an art-world insider to be connected to the culture of video and digital distribution, or to the cult of celebrity. Both are unavoidable quantities. I have always wanted to make work which might in some way be accessible to an audience beyond the immediate art audience, and therefore have ended up speaking in a language which has a certain familiarity to a broad audience, one which does not automatically alienate.

Was there a specific moment that inspired you to start working with these concepts?

It’s hard to pinpoint a particular moment, but when I first left South Africa and moved over to the States—to arrive in Chicago, my port of entry to this country—I found it both ominous and fascinating that the other kids I was meeting, my peers, shared a particular mental archive with me. I had almost nothing in common with the students I was meeting from all over the world in terms of the background of my country, the politics, the history, the growing up experience, but the one thing we had in common was that we had all been consumers of the mass media: we had all listened to a particular Madonna album at a particular moment in time, we had all had a crush on Brad Pitt at a particular moment in time, and so this common ground and strange set of shared memories seemed to me to be worth considering, not to be too easily dismissed. I came to think of the mass media as an opportunity and a vehicle that it might be possible to hijack and reroute as an artist.

On that note, I was reading through the articles on your website, and I was particularly interested in something you said during an interview with Rosanne Alstatt in Kunstbulletin (2001): “The hyper-visualization of difference is used as a tool to promote sameness.” That line really stuck with me. Could you tell me more about that?

For a long period of time we urban creatures were defined by what we produced, what we made, what our jobs were. Increasingly in the post-WWII period, we’ve come to be defined not by what we produce, but by what we consume, what we watch, what we buy, what we hear. There is a certain equation at the heart of the mass media that never goes away: on the one hand what is constantly being sold to us is the promise of individuality, the promise of the possibility to define ourselves as distinct from others, but at the same time mass consumerism insists on homogeneity. Everyone is wearing the same t-shirt or buying the same pair of sneakers, as a gesture of individuality or distinction, but in so doing of course becomes part of a broad tribe of consumers. This tension between wishing to be oneself and to make meaning out of that which you consume, on the one hand, and the pressure, on the other, to conform, to be like others around you, is central to the culture we live in and remains a central obsession in my work—a set of questions that I come at from different angles again and again.

Yeah, I’m thinking about “Karaoke” (2000)—the same song but they’re not native English speakers. I was thinking about that, when people are singing karaoke they’re often not even sure what the words mean, but there’s this feeling of “connectedness.”

Language is supposed to be a transparent quality, a medium that connects people to each other, which serves as a bridge from one person to another. But often language can be exactly the opposite, a quality of exclusion, something that prevents people from participating and being a part of a given moment. In the work you’ve mentioned, karaoke became a metaphor for the language that comes from the outside. Often when people sing karaoke, they sing love songs, songs that are supposed to express something internal, emotions from the inside. But of course the tension is that with karaoke, you’re always receiving language from the outside as you read the scrolling words, language that is precisely not from your heart. So again, the same equation that we discussed earlier returns, the tension between wishing to express something internal which is yours as an individual, as opposed to the need or the inevitability of having to negotiate outside forces, the constant reminder that language ultimately belongs to nobody, language is something which we all share. 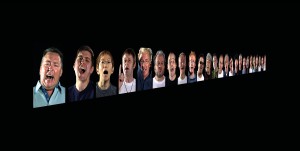 In your artist statement about “The Babel Series” (1999), you say that “the resulting discordant environment owes as much to the new poetics of Dada, Futurism and the Soviet avant-garde as it does to Andy Warhol and MTV.” With Warhol, of course you have the shift in which the art world starts incorporating mass culture icons. And I’m thinking about this now, especially with video art—I was just reading a New York Times article that talked about artists taking bits from the Obama/McCain debates and chopping them up, and it made me think of your work. With that sort of art that’s happening now, do you see any difference between “high art” and “low art”?

I believe there is a direct continuum between YouTube, popular music, Hollywood and what artists are doing. I don’t see my position as an artist as distinct from that of other cultural producers. I want to, or even need to, be a part of that continuum. Which is not to say that this is a big happy-family-continuum, but I think that as an artist, it is as important to be aware of one’s relation to the history of art and the practice of other artists as it is to keep up with the daily newspapers, with YouTube, with new developments in television and popular music.

Speaking of YouTube and the Internet, I was thinking about “Legend,” 2005, in which you went to Jamaica 20 years after Marley’s death and had thirty Jamaicans sing their versions of “Legend” in a professional recording studio; and “Working Class Hero (A Portrait of John Lennon),” 2006, in which, similarly, you recruited fans to re-perform Lennon’s entire first solo album “Plastic Ono Band” (1970). I’m wondering if you see parallels between the process behind your work in pieces like these, and the phenomenon of YouTube fan culture? I’m thinking about the fan/celebrity culture that’s emerging now on YouTube that parallels what Warhol predicted: everyone will have their “15 minutes of fame.” And that’s what’s happening with YouTube. The process behind the Lennon and Marley pieces is similar to what fans of YouTube celebrities do. What do you think about the relations between your work and  YouTube celebrities’ fan culture?
To put it crudely, sometimes when people eat the same food, they shit the same shit. We’re all part of the same zeitgeist, and so it did turn out to be the case that the series of work you’re referring to (my portraits of Bob Marley, John Lennon, Madonna and Michael Jackson) predicted the YouTube format. The first of these works was made in late 2004, early 2005, just before YouTube broke, in that split second before it became a natural part of our landscape. When YouTube came on the scene, people started to ask me if it bothered me that its forms and strategies so closely mirrored my own. In fact for me, that felt like an amazing confirmation. It was incredible to realize that, parallel to what I was doing in my work, there were millions of people out there all looking for similar avenues to place themselves within popular culture. At best, any art reflects its times and what is going on at the time at which it is made, preferably with a critical twist, or such that it becomes legible in a new way.

Candice Breitz speaks at the Art Institute of Chicago’s Price Auditorium (111 S. Michigan Ave) at 12pm on November 4. She urges you to vote before you come to the lecture. At 5pm on November 5, she’ll lecture at her alma mater, the University of Chicago (Cochrane Woods Art Center RM 157).