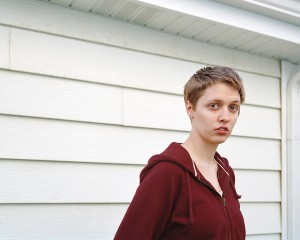 Peter Cardone’s color photograph of a young woman in a cranberry hoodie exquisitely represents what a Sarah Palin voter’s reaction might be to the works of the other four emerging Finnish and Chicago artists, working in various pure and mixed media, in this energetic and cutting show. Cardone’s subject, shot against a white aluminum-sided house, stares at us with gaping eyes and a radically bemused expression on her lips. What else is she supposed to feel when she looks at Riiko Sakkinen’s slide show of appropriated ads mixed in with animation cels in Japanese kitsch style that sends up smarmy commercial culture? Indeed, it seems like everyone is turning Japanese; Melanie Schiff’s photo of an aging Sonic Youth poster, in which the band has dressed up as jolly space warriors, has a Gen X self-ironic laugh at the expense of a Japanese comic-book cover. Postmodernism is alive and well, even if some of us are still dumbfounded. (Michael Weinstein)

1 Comment
Inline Feedbacks
View all comments
From the Arctic to the Prairie Press « Death is the final separation of the sound from the picture track………….