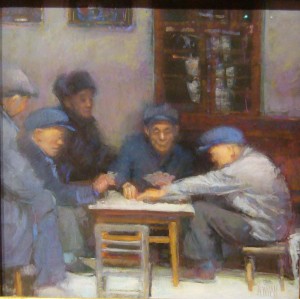 The elegant Nancie King Mertz is going to paint every hill, street and river on the planet—or, at least that seems to be her mission—and she’s been at it for decades, traveling and painting without cease except to return home to work her Lakeview gallery, and even then she’s setting up her easel on the streets of Chicago or painting from the photographs she has just taken in Mexico, or Ireland, or Italy, or Greece or, most recently, Guangxi Province in China. Most of these paintings convey her sense of the fleeting world and the urgency she feels to paint it, but what’s especially interesting about this month’s show at her gallery is the inclusion of eight other Chicago painters who traveled together with her throughout the Middle Kingdom earlier this year, as they all picked up on the local vibes as well as performed for the eyes of each other just like a jazz band on world tour where many of the soloists are distinguished performers in their own right. Like emerging young artist Marci Oleszkiewicz or the virtuosic Kathleen Newman, who has such a strong feeling for Chinese landscape she should probably start brushing ink on paper. D Newman has a strong feeling for Chinese people as well. Her “National Pastime” is just as vigorous a depiction of workers playing cards as the Liu Xiaodong panorama now showing at the Smart Museum. (Both shows should not be missed!) The show also includes work of Stacey Street, Frankie Johnson, Linda Vice, Priscilla Olson, Susan Ploughe and B.J. Liu. (Chris Miller)