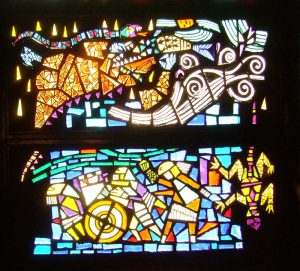 It’s less than a mile north of the western terminus of the Green Line and it’s worth a visit to see two secular artists who discovered their Jewish spirituality in the wake of the Holocaust. The special exhibit here is of William Gropper (1897-1977), a hard-hitting political cartoonist for publications like “The New Masses” and “Daily Worker” as well as a worthy student of the Ash Can School of George Bellows and Robert Henri. The show includes some of his rare paintings on Jewish themes that he began to create, on an annual basis, after visiting a memorial to the Warsaw Ghetto Uprising, as well as his illustrated map of American folklore that got him in big trouble with Joseph McCarthy and the HUAC. But especially it marks the fiftieth anniversary of the five stained-glass windows that he designed for this Conservative Temple in River Forest in 1966. Their creation is a fascinating story because this artist was much more a political activist than a pious Jew and he never made liturgical art before or after this project. And yet, there they are—an entire wall of luminescent glass telling the dramatic stories of Genesis from floor to ceiling, as the struggles of Abraham, Isaac and Joseph come to life. Also to be seen are the figurative relief sculptures that Milton Horn made for the temple a decade earlier. They were, and still are, highly controversial since they resemble the medieval Christian sculpture that Horn himself collected. But still, like Gropper, his figures are more about passionate human struggle than they are about the serene, celestial order of the great cathedrals. In the twentieth century, the Jewish faith has been much more comfortable with iconoclastic modernism, but here are some wonderful, and maybe unique, examples of another path taken by two very skilled Jewish artists. (Chris Miller)

Quite a story indeed… Each of those “five windows” are two stories high and contain 11 panels whose brilliance, I am told, can only be appreciated in person. Sounds completely worthwhile!