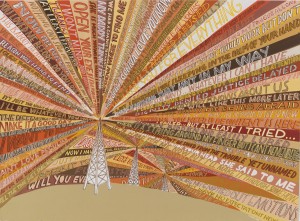 Lora Fosberg’s text paintings are done in a style of lettering once used in display ads of the 1950s and 60s. This style, taught in graphic design trade schools, was adaptable to things like sporting goods, Smokey the Bear, hunting lodge signs, woodburning kits and “Mark Trail.” Nostalgia is one obvious effect here, but Fosberg does not go down that boring road. The pieces create human worlds that are closed in on themselves, unable to move on or break out of their time and place.

In “Thank You for Everything” (2008), catchphrases and clichés radiate from a central transmission tower: “I’ll be whatever you want,” “I want to believe,” “Now or never.” These media-implanted automatisms are presented in a color palette ranging from muted earth tones to rich dark reds. In “Rules for Survival” (2008), bright red callouts are placed on sheets of found paper, barking out rules, such as “Rule No. 4: ENTERTAIN THE MIND (by repeating mantras like ‘I am the man’).” The found paper here happens to be someone’s math homework, a child’s labored handwriting stacking piles of numbers in long division like logs in a log pile. The effect of this is not just funny and pathetic; a little negative miniature is created here of a child’s embattled selfhood. No detail is misused in Fosberg’s work. Some gallery-goers have pointed out a similarity to Darger’s psycho-meteorological cataclysms, but this is only superficial: Fosberg’s art, despite appearances, is about other lives and other people. (David Mark Wise)