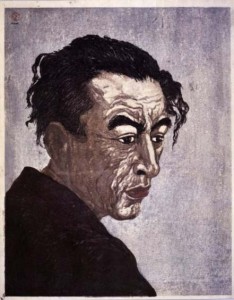 What’s so wonderful about the Buckingham Print Gallery at the Art Institute? Its display is always changing, and it usually invites the viewer into the  high-end pleasure district of Edo with its colorful actors, beautiful courtesans and delicious fabrics. But this month’s show gives us a view of the early twentieth century, seen through the eyes of Onchi Koshiro (1891-1955), an imperial aristocrat who wanted to be a modern artist as he followed European Modernism from Renoir to Abstract Expression—all in the medium of woodblock print. He also followed the tragic story of modern Japan from Meiji modernization all the way to Hiroshima and Nagasaki—and it’s all there—from the sensuality of the female nude to the portrait of a despairing poet to glaring scenes of disaster to quiet moments of reconciliation, but always with impeccable design. A founder of Sosaku Hanga, he is joined in this exhibit by several other artists from that movement of modern printmaking, as well as by a contemporary ceramicist, Kitaoji Rosanjin, “The Foolish Mountain Man” (1883-1959), a successful restaurateur who first “revolutionized Japanese cuisine,” and then turned his voluptuous taste to a variety of traditional styles of ceramic, which he both made and collected. “I do not try to imitate antiques in any superficial way,” he once wrote. “I try to go straight to their inner value, their essence and spirit.” And the same could have been said by any of the print makers in that gallery as well, as they remained traditional Japanese designers despite their modern idiom. (Chris Miller)

Through January 18 at the Art Institute of Chicago, 111 S. Michigan.