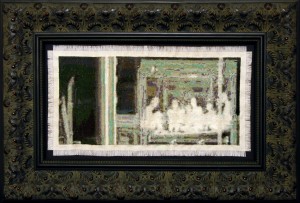 Thomas Robertello has assembled an accomplished group of artists—John Delk, Noelle Mason and Conor McGrady—to address the theme of the political in America. Conor McGrady’s “Pedagogy” (2008) shows a boy clubbing a dead animal while an older man looks on with his hands in his pockets and his hips thrown forward in that wide-legged patriarchal stance. The sun appears in all of McGrady’s pictures like a sickening logo for poison control, and these dysphoric scenes will poison you too if you look at them too long. Noelle Mason is clearly the star of this show. In her work, surveillance technologies are pastiched in low-fi forms like embroidery or stained glass. “X-ray Vision vs. Invisibility” appropriates infrared images of migrant workers taken by the Minutemen, a vigilante border-patrol group. One sequence of five X-ray images shows migrants hiding in the secret compartments of vehicles, and reproduces the imagery in embroidery, set in gaudy frames like nineteenth-century American samplers. The actual work was done by a Brazilian woman, who was paid the equivalent of the cost of illegal transport—by one of “them,” in other words: one wonders whether this piece of breathtaking condescension is not meant as a conceptual joke. John Delk’s “Drain” (2008) was delightful to experience both before and after the Obama election. Here, fragments of Bushspeak are presented in a twenty-nine-minute audio loop through a drain in the floor. A few weeks ago, “Drain” seemed like voices from the drain down which we had gone as a nation. Now, it seems like a fading voice of something that has been definitively flushed. Or maybe it is just stuck down there: we can only hope it won’t crawl back out again. (David Mark Wise)