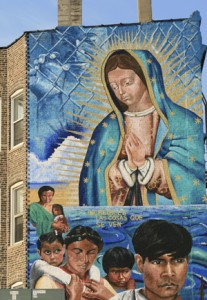 The first things that hit the eye on a sunny day in Pilsen are the murals. There is art everywhere—on storefronts, brickwork, churches, restaurants. The Virgin Mary of Guadalupe glows blue and gold on the side of a four-story building; an unfinished Aztec god gazes down on people behind a tortilleria; in an older mural, a portrait of Che Guevara stares accusingly at passers-by, reminding the majority Mexican-American neighborhood of their collective ancestors and traditions.

These images have become symbols of the neighborhood’s identity. And throughout Chicago, emblematic public art encapsulates the people that make up the “city of neighborhoods.”

Experts say, however, that many of the city’s best “contemporary murals”—from the Public Art Renaissance that began in 1967—are in peril.

Artist Caryl Yasko painted a mural in a Hyde Park underpass near 55th and Lake Park Avenue. It has since been plagued by water damage and crumbling cement. She repainted a panel of the 200-foot long work in October, and is trying to find funding to complete the restoration, provided the city of Chicago fixes drainage problems in the underpass that are undoing her efforts.

Yasko says she returned because restoring the mural and keeping it going “affects another several generations of people.” The mural, she says, helps the neighborhood say to the world, “We think in this place.”

Artist and art professor John Pitman Weber, one of the co-founders of the Chicago Public Art Group in the late 1960s, says his mentors encouraged his group to make sure that murals from the first half of the century were preserved. With CPAG executive director Jon Pounds, Weber is fighting the same battle now, to preserve the murals they created.

“We’re continuing to lose the remaining masterpieces from the 1970s and 1980s at a very disheartening rate,” Weber says. “It’s in neighborhoods [all over the city] where it’s gentrifying and it’s more yuppie.” 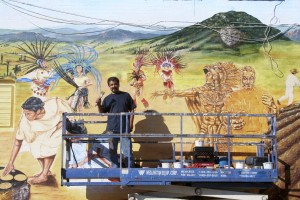 Alejandro Morales stands in front of the mural he spent the past two months painting at the behest of a private sponsor, one of a few murals painted this year in Pilsen.

Pounds thinks if absolutely no effort is made to restore important murals, “we are choosing to allow them to be destroyed.” On the other side of State Street, Weber says the battle to save aging murals is succeeding. “There’s been less of a loss in the Spanish-speaking and black neighborhoods,” he says. “They have a different attitude about art.”

Marcos Raya, a Mexican painter who has been working in Pilsen since 1971, said he goes back and touches up his murals in the neighborhood, if they still exist. He said the public art he and fellow artists made together in the 1970s reflects history, and should be preserved.

“Chicago was one of the most significant cities for the public art movement,” he says. “The murals gave a sense of identity and change to the working people whocame from all over to see them.”

Weber, reflecting on his own work, says many of his murals—and murals throughout the city—have been lost. Raya said he does not know how many of his murals still exist, but that some of the best murals have already been destroyed. “The historic ones should be reconstructed, so that the younger generation are taught to give different voice to their history,” he says.

Weber says any mural restoration project does have access, at least right now, to many of the artists who painted the original works in the 1970s. “The artist can lead the restoration, or at least advise it,” he says. In cases like Yasko’s, then, the artist is able teach the classical, fine art-mural technique to the young artists helping to repaint the mural while revisiting the historic period of the mural. Mural restoration is expensive, however; the price tag on Yasko’s project, which she expects to pay for with community donations, is at least $40,000.

Weber estimates that for every mural reconstructed, perhaps two or more are lost. But mural restoration is only part of the public art movement today. Many artists are interested in creating wholly new work, and some argue that spending money on restoration may inhibit the painting of new projects in the city.  Other artists wonder if there could be a similar public art movement now.

“I don’t know if [the same kind] of mural art exists any more,” says Yasko. “We need to have a new idea, a strength of ‘saying’ to work with the public. I don’t know if it exists in the cities.”

In Pilsen, says Raya, the murals represent community identity. “One problem with not having a history, is not having a collective identity,” he says. “The murals reflect our fight to have our own alderman, [our own high school.]”

Raya says the buildings reflect Pilsen’s working class struggle to become part of the city, and that they’re being torn out to be replaced by condos. By losing that history, Raya says, “we’re becoming the city of big shoulders. And no head.”

Listen to an audio version of this story.