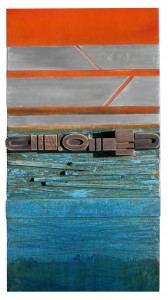 The sea. “It’s mesmerizing,” says Helene Steene, an abstract artist who grew up in Sweden. “I’ve seen it during heavy, heavy storms, in shades of wine-colored red to purple.” Steen stares at the water from her seaside bungalow in Paros, Greece, which she bought twenty-four years ago with her then-husband. While they vacationed with Swedish friends on the tiny island, a Greek man bedecked in gold chains insisted they look at a house for sale. “We looked at each other and said, ‘This makes no sense at all.’ But we went home and scraped the money together and bought it.”

Steene’s abstract art paintings, currently on view at Logsdon 1909 Gallery, pay homage to her summer place in Paros. “Aegean Cove” is a series of eight panels that capture the ocean at various times. A close-up view of part of “Aegean Cove VI” shows a wooden slab layered with acrylic, marble dust, sand and oil glazing. Pure pigments and intense dry powders are next, followed by sanded aluminum shapes and blocks. The forms resemble chapel roofs and Greek columns lying sideways. “Aegean Cove” exudes beauty and poetry, energy and movement. It is Greek frescoes and a crashing, soothing, ever-changing ocean.

A section of “Dilion” shows a swath of red splashed with orange and green paint, topped by aluminum shapes. The rich layers of paint produce a depth and vibrancy that command attention. Red is the color of love, Apollo is the god of love, and remnants of Apollo’s temple are found in Dilion on Paros. Moreover, the temple area that honors Asklepios, the god of healing, gave Steene the name for her mixed media show: “My Asklepion.”

Greece is the inspiration for Steene’s exhibit, but Japanese-born artist Kenzo Okada was a strong influence. Steene discovered his work after marrying an American, moving to D.C., and studying art at George Washington University. While wandering around The Phillips Collection museum, she found Okada’s paintings. Struck by the colors, layering, and build-up of different surfaces, she ran to her teacher’s office, and said, “I don’t understand it. What is this?” It was abstract art, and she was hooked. Her love for this art form “has stayed with me through all these years—through fiber, weaving, collage, painting,” she says.

Following a 1987 move to Lexington, Kentucky, Steene worked on her art and raised her children. Then she returned to school. In 2004, she received her MFA from the University of Kentucky and committed to working as a full-time artist. Lexington may be a small, traditional place, but it has a vibrant art scene, she says.

When Steene began her seascape art, she considered painting only in blue. Instead, she put down the opposite color of orange. Then she sanded, scraped, lifted, pulled—and painted blue on top. Her work is indicative of her admiration for Kenzo Okada and her belief in Japanese philosophy. She says, “You have many disharmonies, things that scrape on each other a bit. But ultimately you can make it all come together.” (Sarah Klose)