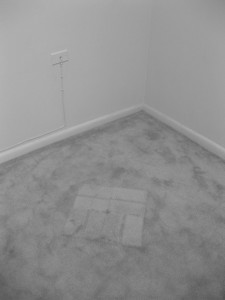 Sometimes artwork takes a conceptual leap of faith to appreciate. In the formal conceptualism of Xavier Jimenez, that leap can be an enjoyable one to make. “Full Quality Beige Without Pink Red, But Blue Gray” is the inaugural exhibition at the apartment-gallery space New York City Gold Coast. The exhibition’s title most makes explicit reference to three paintings in the show in which the artist, in a moment of Gaylen Gerber-esque participation, asked three other painters to mix their version of the color beige. Surprisingly, this is a difficult task yielding three distinct monochromes under the titles “Edmund Chia Beige,” “Jason Dunda Beige,” and “James Kao Beige.” Jimenez’s application of each “beige” color even excites the eye as it relieves the texture of the bedroom/gallery wall on which it hangs.

In a gesture that likewise relishes its setting, “Cinderblock Print” is simply the mark left in the carpet by four heavy cinderblocks. Finding a gesture so economical is a rare occurrence, even if the beauty of the piece relies on the happenstance of art in everyday spaces. It was enough that I left thinking simply about the cultural phenomenon of beige carpet!

Jimenez knows how to take advantage of his surroundings, a style fitting of the alternative space. Other pieces in the show involve subtle gestures throughout the gallery room and the rest of the apartment. Some come off as tropes of conceptual art: found paintings, prescribed vantage points, and overly specific gestures that fail to reveal but nevertheless insist on their own importance. (Tim Ridlen)