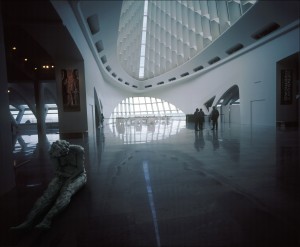 What can you expect from an editor at Artforum when she goes photographic, but high-power conceptual images packing ironical punches at every turn? Claudia Hart builds computer models of bosomy Rubenesque figurines, integrates them in sterile institutional environments, manipulates them so that they are partially covered in mother earth and then disposes them in postures exuding emotion so that they appear as unexpected intruders into corporate technotopia. In her most telling image, Hart’s figure sits on the floor of the ultra-modern Milwaukee Art Museum with her legs stretched out and her back to a group of indistinguishable male suits in the distance who are oblivious to her self-absorbed and perhaps despairing presence. The image radiates tense pathos by virtue of its composition—the oblique line across the corridor from the figure in the left foreground to the men in the right background rivets the eye on the space between that is filled with invisible energetic alienation. (Michael Weinstein)