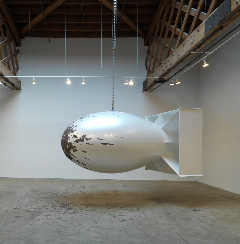 Iñigo Manglano-Ovalle’s first solo show at Donald Young Gallery comes on the heels of his well-received sculpture, “Phantom Truck,” presented at Documenta XII in Kassel, Germany. An idealized version of the mobile chemical lab described by former Secretary of State Colin Powell in his address to the U. N., “Phantom Truck,” pared down from the Documenta installation, shows up in the current exhibition in the form of a shadowy portrait. The gallery’s main space is taken up by a life-size model of the nuclear bomb dropped on Nagasaki and is splattered with mud. Titled “Dirty Bomb,” the shimmering weapon is suspended from the ceiling a few feet above the ground. It is far from menacing and nearly comical. Muting the latent comedy of the bomb, another work, titled “Roost,” presents a miniature geodesic sphere that encloses the artist’s pet rooster. “Roost” is a deeply skeptical portrayal of Buckminster Fuller’s legacy, turning the project of systemic totalizing design into a cage. Far more affecting than either of these sculptures is the video work “Juggernaut” where a camera’s slow pan across a barren icy landscape is overtaken by the wheels of a long industrial truck. Deliberately crunching through the scene, the tires seem a dense and unforgiving symbol of the elephantine military/industrial complex. While impressive in scope, execution and content, it’s difficult to shake the feeling that this is an exhibition of an artist at the height of his career showing the things that didn’t make the cut elsewhere. (Dan Gunn)