By Jason Foumberg and Monica Westin

We challenge you to call these new alt-spaces “art galleries.” In the economic downturn, perhaps a little in-home art entrepreneurship is the most comfortable place to view art. 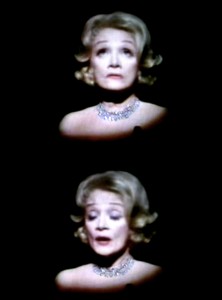 Fresh from a Saturday morning trip to the 61st Street Farmers Market at Dan Peterman’s Experimental Station one bright winter morning, Emily Schroeder doused her apartment-gallery with the evergreen scent of rosemary. It was a warm welcome from a crisp day, as I had already said goodbye to my beloved farmers market; unknown to me was that Peterman’s South Side market runs year-round. Schroeder plucked a book from her recently unpacked library—she moved to Bridgeport in July from New York City—artist Fritz Haeg’s “Attack on the Front Lawn” about suburban gardening projects. I frowned upon studying a seeding chart in the book’s appendix, seeing that the winter months were simply a barren grid, the frozen ground not ideal for growing. “Ah, but things are going on underground,” said Schroeder, likely referring to tuber vegetables but also a perfect metaphor for her own project, an independently-driven apartment-gallery whose programming focuses on its owner’s interest in the intersection of art and ecology.

Schroeder’s focus may be social and political, but so far the two-person exhibitions have hardly been didactic. Work in drawing, collage and video grace her apartment just as one might see it in any art lover’s living space—tastefully arranged above the sofa, on TV and on the refrigerator. The fridge space is a witty addition to the gallery, consisting mostly of work on paper hung with magnets, and is curated by Nate Hitchcock. Through December, Angel Otero’s “Leftover Princess” is on view, while on view in the main space are Hisham Akira Bharoocha’s drawings and collages of man’s interventions in nature—animal husbandry, hunting, and nature walks—and Conrad Ventur’s appropriated video of Marlene Dietrich singing “Where Have All the Flowers Gone?”

Where have all the flowers gone? When will we ever learn? Schroeder is currently engaged in work with the Chicago Park District in a huge effort to revitalize Stearns Quarry in Bridgeport as a green park. The site has a fascinating history. In the early 1800s, the lot now located at 27th and Halsted was found to contain an ancient coral reef. Its rock was mined and used as foundation for many Chicago-area churches and buildings. Once gutted, it was used as a landfill. Now, with ecological efforts underway to transform the lot into something useful for the community, Schroeder and others are working on educational material about the quarry’s history and redevelopment. Back at the apartment, Bharoocha’s drawing envisions a fairybook child lost in a thicket of lines. (JF)

Normal Projects is located at 2844 South Normal, open by appointment.

Scott Projects, run by artist Brad Troemel, is located in the former All Rise Gallery space next door to Heaven in Wicker Park, and is now hosting the group show “Works Not on the Internet.” The title isn’t just witty, as the thirteen artists assembled here also make art and display it on a Web site called Good Drawers. The material in the gallery reflects their esthetic: appropriated photographs and lo-fi digital manipulations bespeaking a nostalgia for Internet art circa 1996. Upcoming events include an ambient sound installation and a dance party. (JF)

Scott Projects is located at 1542 North Milwaukee, open by appointment. 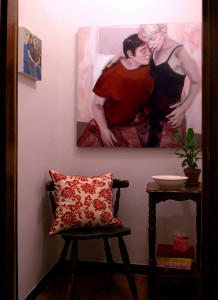 Knock Knock Gallery is the beau ideal of the small artist-run alternative gallery, whose mission—to explore the tension between public and private space—is quite literally embodied by the gallery space itself: a staircase, landing and simple room into which they open. Owner Harley Young, adamantly hands-off as far as the actual curatorial work of his shows, started Knock Knock as a venue for site-specific works, from sculpture to performance art, that incorporate the stairway, and he seems to have hit on an effective and invigorating model; the recent “3 Way” show, Knock Knock’s first devoted to painting, exhibits clear intellectual examination about space and display as much as the thoughtful collaboration of its three artists who curated the show. The painters, all recent MFA graduates from SAIC, have much to gain from showing their work together; all include similarly themed paintings of domestic relationships that show individual style as well as a real conversation between them. Karen Azarnia’s paintings border on photorealism, focusing on family portraits, and set the tone of near-reality that are borne out by Corinne Halbert’s compositions about the transience of such romantic and home life (including some striking images that participate in the genre of the family pose, but with heads and arms outside the canvas), and Brook Barnette, whose formal deconstruction of the family photograph through media layering and manipulation creates a strong sense of instability in the show’s semi-fiction. What makes this show special is the way the artists’ concerns are manifested by their tongue-in-cheek curating, which features clusters of their paintings going up the stairs and then above the landing as though creating a particularly surreal family album. (MW)