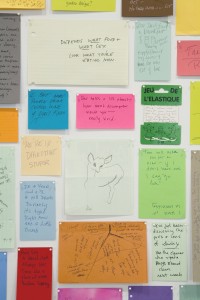 Chicago artist Joseph Grigely has an intensely self-reflexive practice. Using his experiences as a deaf person, Grigley explores the stuff of everyday discourse—words, sounds, sentences—shaped by what the artist calls a “meaningful kind of meaninglessness.” His current exhibition features installations, sound and video works, all dealing with language and the nature of (mis)communication.

In “We’re Bantering Drunkening About What’s Important in Life,” Grigely hangs notes with bits of conversations jotted on them—traces of his “spoken” interactions with friends and strangers. Hung in a grid, the notes imply humor (“We’re in digestive stupor”), reflect some banalities (“We do accept checks”) and bespeak empathy (“She loves you”). Questions, statements and sketches created by Grigely and those with whom he converses create a record of past narratives. While the fragments don’t always reveal connections and shared bonds, they all suggest attempts.

The exhibition’s centerpiece is “St. Cecilia,” a two-channel video installation. Named for the patron saint of music, the videos feature a choir singing three Christmas carols. The catch? In one video, the choir sings lyrics of words based on the common misreadings that come when trying to lip-read these songs. The lyrics “Sleep in heavenly peace” become “Tell me everything please.” Shown next to a video of the choir singing the original words, the installation explores the idea of the productive mistranslation, the idea that everyday disconnects are substantive for their creative possibilities, if not only revealing of difference. Just out of sync enough to be disorientating, the videos make real the simultaneous bigness and subtly of aural and visual disconnects.

Grigely, a professor of Visual and Critical Studies at the School of the Art Institute of Chicago, says it is important to keep academic critical theory from becoming a “modulating force” in his art. Ultimately, he says, “the art takes its own path.” The most ineffable work in the exhibition does just that, and it is Grigely at his most restrained. Based on a newspaper clipping in which a fisherman defends the merits of ice fishing, the installation “That’s What We Live For” consists of two overturned buckets fabricated out of crystal urethane resembling ice. The buckets are positioned in close proximity as they would be if used by two fishermen. Using absence to suggest corporeal presence, the installation uses space and material in a masterfully emotive way recalling Fred Sandback’s charged spatial constructions.

Grigely shows us that where language seems silent, it is in fact the loudest. His work, because it is about attempts to connect rather than successful bonds, produces a conviviality more real than most overtly ‘relational’ works of the last several decades that strive to connect audiences in real-time. And if we consider that any type of universality could possibly exist within the limits of human experience, Grigely makes visible the collective frustration, absurdity and vulnerability that characterize human discourse—spoken, written or signed. (Jessica Cochran)