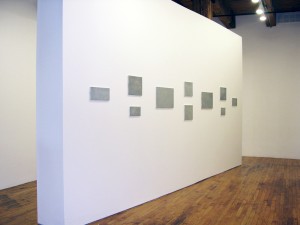 The small abstractions of David Schutter require one step forward to get a good look, and one step back to fully take them in. The works in “Repertory” at Tony Wight Gallery exist as a group of studies after Nineteenth-century landscape painter John Constable’s clouds, making an entry into the meta-conversation of painting with subtle and discreet gestures.  The largest gesture seems to be the simple rearrangement of the gallery’s wall space: Schutter has installed a free-standing diagonal wall with ten paintings on each side—an approximation of the wall at the Yale Center for British Art (YCBA) where the Constable paintings hang.

Constable’s clouds were meant as studies in a larger process of landscape painting, and Schutter here calls on these images almost as if to erase them. Constable’s vigorous cloud forms appear only in the surface and texture of Schutter’s monochrome gray paintings. Each canvas doubles as an act of negation and recreation, employing abstraction in its best sense.

In the rear gallery, several graphite drawings continue to work through the visual information Schutter has collected from the YCBA. Delicate marks on vellum appear at first to be what has been left out of the paintings, but in fact they are more like what’s left over. This inverted use of drawing—as the end of a process rather than its beginning — makes sense of  “Repertory” as a fissure through which we might get a different look at the practice of painting. (Tim Ridlen)