Dresses swish as fast as palm tree leaves in Miami, where the entire art world gathers for the annual spending spree. Alicia Eler’s daily blog clues you in on finds at the fairs, from the established Art Basel Miami Beach (the mother of all the Miami art fairs) to Chicago’s born-and-bred emerging art fair, Bridge. Tips of the day provided by Kansas City-based artist Peregrine Honig.

When bigger is better

Should you pull out the big guns at the beginning, or wait till later? Do it now while viewers still have energy and open eyes, because after a week of looking at thousands of booths filled with art, even a Gerhard Richter might start to look like an Andy Warhol soup can. 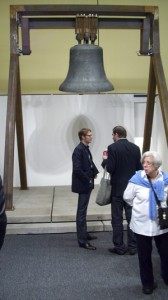 Sies + Höke Galerie must have had that same thought when they decided to bring Kris Martin’s “For Whom…” (2008), which takes up the entire Düsseldorf-based gallery’s booth at Art Basel Miami Beach. Borrowing from John Donnes’ eponymous line, Martin’s bell swings, hitting hard metaphorically but not literally precisely because of what it lacks: the pendulum. The nearly 100-year-old bronze bell, originally built in 1929, hangs from the top of a 216.54-inch tall steel support. In its original church context, this bell wouldn’t serve its purpose of keeping track of time, signaling a call to prayer or signaling ceremony commencements. In the white-cube context, one watches the bell swing back and forth, hearing only its whistling movements drift through the air. Posing existential questions about our own mortality and the fate of a flawed system that keeps going despite its lack of working parts, Martin’s piece stuns like a Jenny Holzer truism.

Monumental takes on another form at SCOPE’s grown-up carnival land installation “Fun House” by Miami-based collective FriendsWithYou. One merely slips off their shows and enters the giant inflatable bouncy house through a large circle entrance. Jumping up and down releases any stress and channels the oft-forgotten inner child. 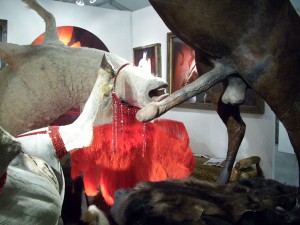 Smiles begone, however, once one sees the installation of an oversized horse three-way scene by Gregory de la Haba (Gallery Privee at Bridge Wynwood). As a giant brown male horse stands on its hind legs—his large cock in mid-air, heading toward the vagina of a white female horse who is adorned with a red feather hat and glittery red harness—a second identical white female horse, floating on her backside, flings her mouth toward the brown horse’s membrane. A child-size doll stands nearby, her back to the scene. It’s questionable as to why a horse three-way would happen directly behind an innocent-looking girl, but thankfully she doesn’t notice the spectacle. A steady stream of viewers do, however; crowds gathered around the horses, muttering stunned remarks to one another. At once intriguing and disturbing, this installation provides an unusual foray into the world of horse sex. I suggest keeping your My Little Ponies at home. 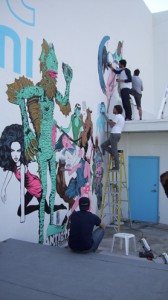 Friendlier beasts abound in a wall-size mural by New York-based artist collective Antistrot, conveniently visible onto the exterior of Aqua Wynwood’s warehouse-like façade. Large-scale creatures and characters spew forth cartoon and comic book-flavored pop culture: A wary gorilla peers to his right, a sense of sadness emanating from his with eerily human eyeballs, while a light-brown-skinned Muslim girl, her big brown eyes distant, solemnly carries a neon pink machine gun.

Though all of these pieces are either large in scale or in message, the monumental theme best applies to a portrait of Barack Obama, arguably the most important man alive today. German photographer Martin Schoeller, whose large-scale 2004 portrait “Barack Obama” on display at Hasted + Hunt’s Art Miami booth, honestly captures the now-president-elect while he was still a state senator. Schoeller, who studied under Annie Leibovitz, uses his detailed lens to take crisp, straight-forward, large-scale portraits of celebrities, including Heath Ledger and Justin Timberlake. For example, in the Obama portrait, he illuminates Obama’s glowing brown eyes, and focuses details on the soon-to-be-president’s nose, cheeks and lips, exposing a feeling of gentle honesty that one can sometimes only see through a frozen moment in time. 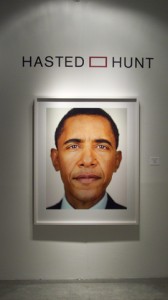 With Obama peering out from at least one wall of every fair, the German church bell keeps swinging, never tolling. And so we arrive at Peregrine’s Miami tip of the day: German comes in handy. Learn it, especially if you recognize for whom the bell tolls.