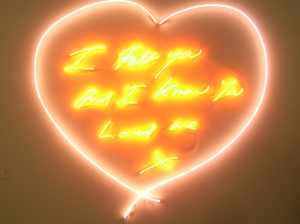 When one starts seeing the same neon lights on flashy hotel signs in Miami Beach as they do in art fair booths, always remember that arguments about the separation between pop culture and the art world are useless.

Tracey Emin’s heart-shaped neon sign “For You” (2008) at White Cube Gallery’s Art Basel Miami Beach booth continues the Young British Artist’s exploration into, well, herself. Emin never holds back, spilling her guts to the viewer through her soap operatic art-making process. Inside her bright light pink heart, she bends red neon tubes into a scrawly sentence that reads, “I felt you and I knew you loved me X.” Sad and sappy like a tearjerker moment in a bad romance film, Emin’s newest work recalls her 1996 neon sign “Kiss me, kiss me, cover my body in love” that’s almost exactly the same but without the cheeky heart. Jonathan Monk’s “The sex is the same but the dishes start to pile up” (2008), created with the same pink neon but mounted on a black rectangle of Plexiglas (Yvon Lambert Gallery), revels in its mature male sensitivity and conceptual basis, bypassing Emin’s purposefully sloppy, emotive aggravations. While Emin’s work reads with whinyness, Monk’s signage typifies a more rational, poetic approach to one such truth.

How much love is enough, though? According to Uri Dowbenko of New Improved Art Gallery (Pray, Montana), showing at Bridge Art Fair Miami Beach, the answer is…never. Like a knock-off of a Miller Lite Valentine’s Day special sign, the diner-style cursive letters of Dowbenko’s neon pink “Never Enough” (2008) elicit neither an ironic shrug nor a passionate outpouring of emotion. The titular text is encased in a perfectly symmetrical heart, which only adds to this piece’s bland approach to art that’s inspired by real life. 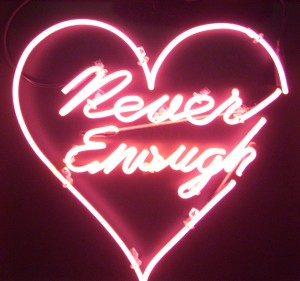 When real life and love get too depressing, however, pop a few pills and get crazy happy. British artists Tim Noble and Sue Webster’s conceptual piece, “Happy” (1999), showing at Deitch Projects (Art Basel Miami Beach), a blinking carnival-like sign with the word “Happy” spelled in soft cursive letters, casts a multicolored, schizophrenic and seizure-inducing glow on anyone who crosses its path. The 298 multicolored light bulbs blink randomly,  creating a hypnotic effect that later repels, leaving the slippery taste of artificial sweetener on one’s lips. During tough economic times, this darkly ironic piece reminds one of a Prozac nation struggling to stay present. Glassy-eyed and sad, “Happy” corners haunting global fears. 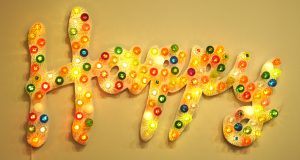 Leo Villareal uses light, but in a way that induces spacing out—not tuning in. “Big Bang” (2008) at Conner Contemporary Art (PULSE Art Fair) is made of 1600 light-emitting diodes arranged in outwardly growing circular patterns that twirl, explode and flicker using a code that coincides with the title. The precisely positioned bulbs on the five-foot-wide circle find Modernist roots in pointillism, but push forward into the twentieth century, recalling 1970s-style psychedelia. 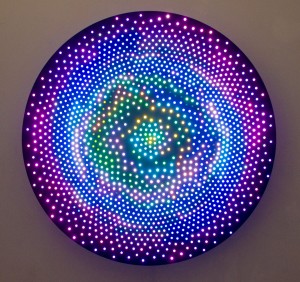 In terms of actual wattage, however, light shone brightest at Friday night parties, particularly the Art Nexus magazine party in downtown Miami at the IconBrickell, which was hosted on a fifteenth floor two-acre pool deck. While pianist Julian de la Chica tapped away on piano keys, DJ Shlomi blasted beats, creating a giant lounge-like feel that’s typical of Miami’s over-the-top luxury-inducing spaces. Lying on one of the many beds as green lasers bounced off the façade of the neighboring building, white light reflected off the slick walls, and guests nibbled on powdery circular sugar cookies. Back in Miami Beach, the über-exclusive Vanity Fair party at the Raleigh Hotel had guests lined up down the street. Nearby at the National Hotel, the School of the Art Institute of Chicago hosted an alumni get-together where one could find the likes of Rashid Johnson, Carrie Schneider and Justin Cooper (all represented by Monique Meloche Gallery).

With all these flashing lights and constant party hopping, however, it’s important to eat—something that’s easy to forget about in Miami where you’re either sitting by an oversized or oddly shaped pool, or racing from fair to fair.

Peregrine’s tip of the day: Don’t get hangry, meaning “hungover from hunger.” If you do, the bright signs and flashing light bulbs, combined with celebrity citings of Jay-Z and Beyonce at Art Basel, might wear you down.