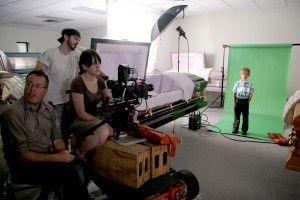 It’s still hard to justify the expenses of technology—and the necessary viewer attention—needed for displaying video art, especially at fairs where each tiny booth must compete with thousands of others. Most galleries don’t want to take the video art risk except, perhaps, Postmasters Gallery (PULSE Art Fair), where owner Magdalena Sawon included Omer Fast’s “Looking Pretty for God (after G.W.)” (2008), Guy Ben-Ner’s “Second Nature” (2005) and Katarzyna Kozyra’s “Don’t Cry Honey, They are Evil They are Men” (2008)—more video than I saw at any booth. Conversely, in a conversation with Jack the Pelican owner Don Carroll (showing at SCOPE), the dealer asserted that including one video in a show actually took attention away from other, perhaps more easily sellable, pieces. Then again, ShanghART Gallery, showing at Art Basel, took up an entire wall with Yang Zhenzhong’s five-channel video “I Will Die” (2000-2005), which showed at the 2007 Venice Biennial, and Donald Young Gallery displayed four 2008 Gary Hill videos arranged as a four-channel piece (“Up Against Down” [right hand], “Up Against Down” [face], “Up Against Down” [back/torso], and “Up Against Down” [left foot]). Likewise, Peres Projects (Berlin) sectioned off a viewing space for a Paul Lee video, as did König Gallery (Berlin) for Jordan Wolfson’s “untitled false document” (2008). 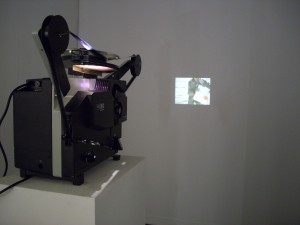 Many of the art fairs addressed the video-art viewing dilemma directly by including sectioned-off video/new media art lounges. Art Basel Miami Beach’s gallery show was housed in the Miami Beach Convention Center, positioning the Art Video Lounge across the street at the Botanical Gardens with selections by Rosemarie Trockel, Trisha Brown (including “WATER MOTOR,” 1978, a recording of the artist dancing at Merce Cunningham Studio), and Deimantas Narkevicus’ “Energy Lithuania” (2000), a meditative journey through a town built entirely around an electrical facility. Art Miami presented their first installment of the New Media Lounge, curated by Asher Remy-Toledo, who hand-selected six international institutions to present one video work each inside individual viewing spaces. Guests streamed in and out of Bjørn Melhus’ “Deadly Storms” (2008)—curated by Julia Draganovic of The Palazzo Delle Art Napoli, PAN, Naples, Italy—a three-screen installation best viewed from the middle of the room. On each screen, three panels of the same bald, Star Trek-looking man repeated dialog about an impending attack, stating that no one knew where it was coming from or what exactly was going on. Yellow lights glittered where the newsperson’s name and other variously “important” news scrolls, and swishing “zoom-in” sounds spilled in and out of the speakers, causing viewers to stand on edge as they waited for the report that never arrived. Using the same conceptual base as Candice Breitz’s video “Mother + Father” (2005), which plucked six mothers and six fathers from popular Hollywood films, removed the backgrounds and left them in a black-background setting, Melhus similarly reduces sensationalistic television news reports to their essence, thus revealing the media’s manipulative techniques. 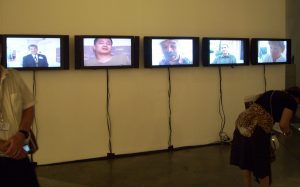 Curation challenges run alongside copyright issues: If each piece of video art is contained on a single DVD, everyone from the artist to the collector must be able to retain control over illegal distribution. Art Basel examined this issue through a discussion featuring Christopher Eamon of the Richard and Pamela Kramlich Collection (the Kramlichs have been video art collector pioneers since the mid-1980s), British artist Isaac Julien, Lars Nittve of the Moderna Museet in Stockholm, Peter Andersson of the Scandinavian Trust Group (Sweden/Switzerland), and Johan Wilén of GTC Market Support in Sweden. Infusing the idea of “taking the physical art world values into a digital context,” the discussion centered around how an artist can retain digital art copyrights in the face of a YouTube world, but veered off into less legal-focused topics like the changing technological formats of video art, and the idea that buying video is more about the video piece’s content rather than the physical DVD. As such, each piece of video art must be considered a conceptual work of art, not an object. Later Eamon suggested that in an installation context, the environment in which the video is installed is the work of art, not the DVD, meaning that the only truly salable object is a photographic documentation of the video installation. Yet in an age of sound bytes, fast downloads, rapid-fire emails and constant contact via Blackberries and iPhones, perhaps DVDs will become extinct, transporting questions about the object-hood of video art into an even more meta-realm.

As technology continues evolving, and the transmission of data becomes quicker and more compact, video will continue questioning itself. Viewers must ask themselves how best to comprehend a medium that is at once a visual and auditory experience, but also an increasingly cerebral one.