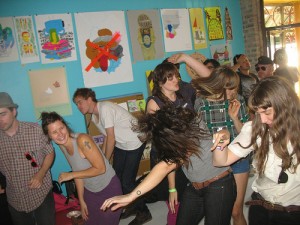 As the Pilsen arts community continues to sprawl in all directions, quietly worming its way into obscure garage venues like Vega Estates and makeshift attic galleries like Brown Triangle, it’s no surprise that a storefront operation at 17th and Laflin called No Coast is already making steady ground since its recent opening in October. With its token attributes being a graffitied newspaper box-turned-free-book-exchange and quirky green awning still advertising goods from a past entrepreneur, the corner facade has already become both a beacon to the creative class and a curiosity to the locals.

Inside, the storefront portion of the space consists of tables lined with screen-printed books, flanked by shelves and racks housing clothing, homemade jewelry, records, cassette tapes and more printed matter. The walls are packed with printed posters, all of which seem to possess the sort of throwback, fuck-off, homespun approach and lo-fi attitude found in a post-punk American mainstream in search of something to bitch about. Look deeper, however, and you’ll find that the members of this collective are actually doing something, taking action in a time when thankless bleating at openings and spineless imperiousness on art blogs have become status quo. 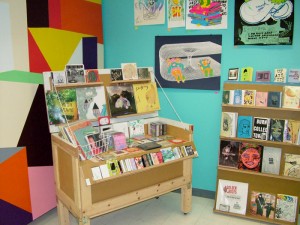 Walking through the storefront into the No Coast’s upstairs “clean zone,” it immediately becomes evident that hard work, substance, discipline and realism set the tone at the collective. The backroom of the ground floor operates as a workshop, studio and expansion of the storefront during events including sometimes music venue and the recent Lock-In, a twenty-four-hour session of screen-printing, book-binding and shadow puppet classes. In the back area, members of the collective can be observed working on projects like designing and manufacturing organic clothing, while, on a recent visit, pleasant music and a quiet chess game takes place in the front of the shop. A welcoming harmony exists between the front of the house and workshop, which is precisely what the members of the collective—all makers—strive to attain.