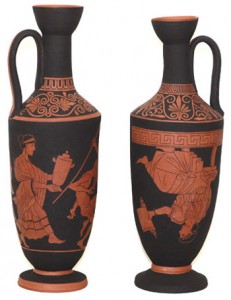 Nicholas Freeman’s work momentarily transports viewers to ancient Greece, only to pull them back to the present, and keeps them lingering between the two. Freeman’s terracotta paintings, on pottery thrown by Lisa Harris and Jennifer Cooper, emulate ancient Greek vases and drinking cups painted in the Red-figure style. Ornate borders and familiar characters from Greek mythology decorate the pottery— Prometheus and Pandora appear back to back, bearing their respective offerings for mankind; satyrs frolic and play. But these are not exact replicas of the ancient world. On some pieces, contemporary figures mingle among mythological characters. Other pieces have unique twists. Clio, the muse of history, is seated with a scroll—upside down—as a flag would be hung in times of distress. Is our history under that much of a threat? Freeman thinks so. He makes correlations between Greek mythology and modern-day issues, and uses classical imagery to comment on current events. The centerpiece of the show is a large vase depicting the slaying of Argos, the hundred-eyed guard of Hera. Freeman likens Argos’ 100 watchful eyes to the hundred US Senate members, who approved the President’s declaration of war on Iraq. The association suggests they fell asleep on the job as well. The viewer may have difficulty extracting contemporary meaning from the work without the accompanying texts, but the show does provide food for thought. Any art-history buff will also enjoy this great tribute to the sixth-century painting innovation that had a profound influence on Greek pottery. (Patrice Connelly)