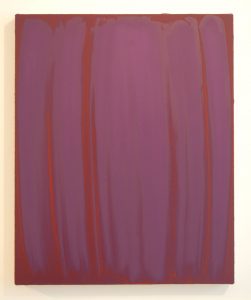 Five artists working within the often hard-to-qualify region of abstraction create an incredibly potent phenomenon at Lloyd Dobler with “Pictures of Nothing.” The gallery can barely contain some of the work on its walls, especially Philip Vanderhyden’s powerful color field studies which seem to literally breathe, pressed up and out from the very edges of the canvas. They have a pulse and depth surpassing much of the work around them, though Michael Anthony Simon’s wood blocks with black squares are so effective precisely because of how difficult they are to focus on. One black square occupies a different position on each wood block, seeming to point at the overlapping shadows on the wall beyond them, calling into question exactly what Simon’s art might be. Is it the sculpture or the space from which it is hewn? John Opera’s addition to the show is small but carries itself well, an archival inkjet print of dense black in which a spray of gold describes yet another black square, almost floating out beyond its frame. The piece resembles a postmodern religious artifact courtesy of Xerox. The show as a whole calls to mind the progression of the works of genius Robert Irwin, from simple abstract statements to highly focused phenomenological questions, and may be the finest Lloyd Dobler has mounted yet. The small gallery has already been around for more than two years, so maybe it’s safe to hope that they will survive and thrive and someday offer a show of these same artists in a larger space, a show overwhelming enough to really knock you out of your skin and into some kind of nothingness for just a moment. An abstracted frame of mind might be the best vantage from which to view these great works. (Damien James)