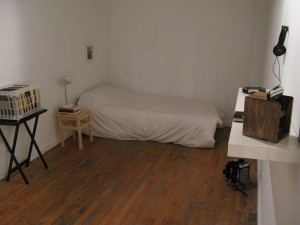 ThreeWalls features “Turned Intos,” a show on loan from the Alternator Gallery in British Columbia. The three Canadian artists featured in the show are Scott August, Bracken H’anuse Corlett and Sarah Fuller. Fuller’s contribution to the show is one part installation, one part performance and one part interactive. Essentially, Fuller has created a “dream lab” within the smaller room in the gallery and sleeps and works in this space. Her investigation of dreams recalls the films of fellow Winnipeg-based director Guy Maddin. Fuller goes about recording herself sleeping with the use of a pinhole camera. The shutter is left open for the duration of her slumber and the resulting images have an eerie presence. Her ultimate goal is to come away with the quantifiable and physical results from her dreams. In order to do this, she records her dreams and compiles them into an archive. Not only are participants invited to listen these recordings, but they are able to record their own experiences as well.

Whether or not it was intended, the works by Scott August are playfully coordinated with the swing that hangs in the front of the gallery. Call it kitsch or call it camp, but the imagery in August’s work definitely walks the line. The next room showcases the work of Bracken H’anuse Corlett and is pulled together by a fully multi-media installation complete with a video projection, tribal masks and paintings. The centerpiece is the new video titled “Quqva,” and stems from his work as a documentarian in his home territory of Wuikinuxv. (MK Meador)

Interesting! I’ll have to check out the show. Well done review. You should be a writer.