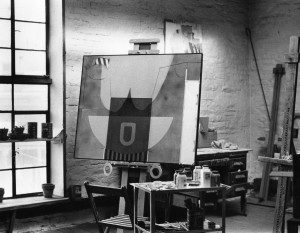 “He’s dead, and he’s dead, and he’s dead…” says Lynn Kearney with a little laughing sigh of disbelief as she flips through artist files spanning the whole sixty-year history of the Contemporary Art Workshop. The Lincoln Park exhibition space and artist studios will close to the public January 23. Kearney’s meticulous files of show cards, exhibition reviews and documentary photographs will soon join the Chicago History Museum’s archives, a testament to the CAW’s long-standing and deeply-entrenched relationship with the city’s emerging artist scene.

The mission of the space, since its inception in 1949, has been to grant young artists their first solo exhibition and maintain affordable studios. As she packed up the files, Lynn, who is a founding member with husband Jack Kearney, came across a notice to an artist from the 1960s. She was apologetic to notify the artist that his studio rent was being raised from $12.50 to $15 per month. Even today, the CAW has maintained relatively inexpensive studio spaces for working artists, averaging $250–300 per month, approximately half the rent an artist might find elsewhere. To boot, the community-based spirit of the venue helped form a network of artists, both in-house and throughout the city. Its massive exhibition roster includes Ellen Lanyon, Ruth Duckworth, and Jim Lutes.

The current Lincoln Park building holds about twenty studios with hallways that zigzag through rooms carved out of the idiosyncratic second and third floor spaces. Walls of Kearney’s office have been cobbled together from drywall and pegboard. The two exhibition galleries have adequate, but not pristine, walls and lighting. This has been the CAW’s charm—artist-run, handmade, and surviving as a non-profit by the skin of its teeth for sixty years. “We wanted to build our own world,” says Kearney. 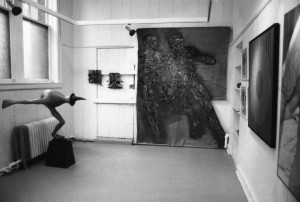 The CAW moved to their present location on West Grant Place near Lincoln Avenue in 1960. The largely affluent residential neighborhood with upscale boutiques and cafés wasn’t always so. Fifty years ago, when Jack spotted the site, Lincoln Park was mainly rooming houses. In February the Kearneys sold their 10,000 square-foot, three-story building for $2.2 million to John Supera, who owns a large apartment business in Chicago, and it is rumored that noted architect John Vinci, who recently redesigned the Art Institute’s European painting galleries, has been brought on board for the redevelopment. Whether the building is transformed into lofts or a mansion, it is a landmark building, so the CAW’s stately brick façade will need to be preserved.

“I love to work,” says Lynn, who’s been running the CAW with Jack and various curatorial assistants since its inception; “I have about another five-to-ten years left in me to continue the space.” But Jack, 84, who has a studio on the ground floor for his large figurative sculptures made from shiny automobile parts—these can be seen on nearby Lincoln Park lawns and in Oz Park—is beginning to feel the effects of a degenerative eye condition. 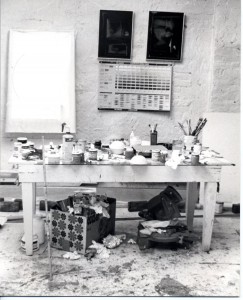 In1949 the CAW found its first home on Rush Street at the corner of Michigan Avenue. At the time there was a building that lay empty for years—it was originally built as the McCormick family’s carriage house. The founding members of CAW with the Kearneys—Leon Golub, Cosmo Campoli, Ray Fink, Al Kwitz (all deceased now)—headed north after the wrecking ball arrived. Today, the site is occupied by the Ralph Lauren store and restaurant.

“We’ve always been non-profit,” jokes Kearney about how they’ve barely earned enough money to pay the heating bills. But Jack steadily receives new sculpture commissions—as I visited a large horse was being welded by assistants—and they’ve been able to spend summers at their Cape Cod home. Fundraising has always been a challenge, and some grants can take a month to assemble, says Lynn, but they’ve received support consistently. When the National Endowment for the Arts started up in the 1960s, they approached the CAW and asked them to apply, noting the CAW’s exemplary support structure. At their final opening reception earlier this month, Lincoln Park’s alderman presented the Kearneys with a commendation from Mayor Daley.

Thinking on the past sixty years, Lynn says she’s been grateful to know so many artists. And she’s seen it all, avant-garde people and ideas, and styles ranging from abstract to figurative, trends emerging and fading and reappearing. “Artists are the most trustworthy people,” she says with satisfaction. Pointing to a large gooey abstract painting by SAIC student Angel Otero in her office, she remarks that the kid’s got the goods. Her passion for art continues, even if CAW doesn’t.