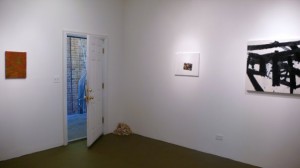 Julius Caesar is a studio space turned gallery located in a Garfield Park warehouse. Newcity sat down with the five artists who make up Julius Caesar to find out more.

Why Julius Caesar as a name?
It was a Dadaist gesture. Everybody picked up a book and pointed to a page. We could’ve been cheese soup gallery! We liked the anonymity of the name and we’re wary of the joke of personality whereby gallerists give their spaces their own name, and those names accumulate this kind of grandiosity.

There are five of you, how do you make decisions?
We made a decision early on to meet in person, so things don’t actually get tense, if somebody is like “this is upsetting me” we talk about it and there is a new level of understanding that is reached (within the group). We all have ideas and a mutual respect for each other.

We had feigned attempts at a manifesto or an agenda but that wasn’t going to function. That’s the advantage of Caesar being this character. We are all the little limbs and organs of Caesar this benevolent dictator that we’ve made up. What would Caesar do or not do? He ends up being demonstrative of our own best desires for showing local people or abstraction or whatever. Caesar is an actual person that has a one-year history of being. Maybe in the future we can look back and say what Caesar is like. Then we can ask questions like “Do we like how it’s been or do we want to change it?”

Is there any conflict in showing your own art?
No, I think it’s a great opportunity to show in an environment that we feel is experimental, free, sane, permissive and supportive and there is an expectation of openness on the part of people of who go there. We don’t know what the motives behind other galleries are, whereas we know that the motive behind Caesar is pretty vague if nonexistent, it feels transparent. We’re artists and we’re trying to make art. That’s all we’re trying to do. Being a gallerist is not our career option. We’re interested in making art, in other people making art and in seeing art. It’s taking a long time to figure out what Caesar is; it’s not a garage, an arena for commercial exhibits or an avant-garde forum. It’s a space.