“Prototype” at Mini Dutch announces itself as an exhibition of incomplete work.  Compelling at first when considering the process of kinetic art-makers Michael Una, Robert Andrew Mueller and Mark Porter, the complexity of such a concept takes shape in a troubling way. Beginning with Mueller’s system of pneumatic muscles that pump away loudly and a bit awkwardly, one begins to understand that the work in the show is not so much about what’s there, but what could come next. Mueller has managed to successfully replicate semi-human movements albeit with a complex system involving an air compressor, a motor, and a series of brake cables. While it is a commendable achievement, this small success still leaves the viewer wanting. However, one could always argue, is that not the goal of the prototype? Therein lies the troubling futility of “Prototype.” 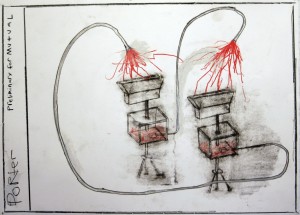 If drawing seems a more natural form of prototype for the aesthetic realm, Mark Porter has confounded that notion by situating his drawings somewhere between the blueprint—simply meant to illustrate a design—and the autonomous finished product. His drawings do in fact read as blueprints in their layout, but their production and line quality look as if they were never meant to leave the studio, despite the artist’s signature hogging the page. What is brave about a show of prototypes, and what continues to fascinate in this show at Mini Dutch, is the potential for failure. Failure is rewarding, but is futility? (Tim Ridlen)

I think the reviewer should read the Mini Dutch Mission Statement:

Mini dutch is an apartment gallery where emerging artists are welcome to show work, especially works-in-progress and experimental pieces. The processes behind “art” are underappreciated and one hope is to explore some of these hidden thoughts, sketches and ambitions. Site-specific installation is favored because then the space becomes part of the experiment and process.

mini dutch focuses on all types of media in a somewhat traditional contemporary context. This quasi-white box offers to some extent a professional setting, while still allowing fluidity in presentation and variation in audience

In response, I did read the mission statement and found this aspect of the show and the space to be the most rewarding. I’ve tried to frame my insights as questions about the challenges versus the rewards of such an approach.