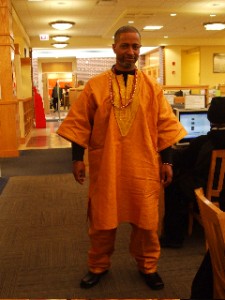 Artist Marcus Akinlana was back in town in early December, to dedicate the first mural he’d completed in Chicago in 13 years. The work, called “The Storyteller’s Coup d’État and Centrifugal Pullmanesque,” is located in the Main Reading Room of the recently built West Pullman Branch Library. After finishing the Chicago mural landmark “The Great Migration” at 39th and Michigan, in 1995, the Washington, D.C. native moved permanently to New Orleans, where his family has roots and where he’d been spending part of each year since 1991.

It was there, in his Gentilly home studio, that Akinlana created the four canvas panels and a wall sculpture that make up the modest atrium mural, a $45,000 City of Chicago Percent for Art commission that depicts scenes from six novels and poems by mostly African-American writers with Illinois ties—Richard Wright, Charles Johnson, Eleanor Taylor Bland, Angela Jackson. Akinlana installed the piece this past July, but—due to commitments in Philadelphia, where he’s now finishing up a mural on the Tuskegee Airmen—Akinlana couldn’t make it here until recently. “It’s like a reunion,” he’d said, a day before the December 6 dedication. “This is a second home for me. It’s great to be back in this town where murals are a part of the cultural tradition.”

During his decade in Chicago, the 42-year-old Akinlana—who graduated from the School of the Art Institute—led or co-led a half-dozen African-American heritage-themed community murals, most of which have faded or been erased. One was controversial. In 1992, the American Honda Motor Co. ran an ad in Johnson Publishing Co. magazines featuring an unauthorized reproduction of an image from the now-destroyed “South Shore Rests on the Bosom of Oshun” (the Yoruba goddess of love and beauty). Akinlana sued, and later received an out-of-court settlement in the mid-five figures. (The lawsuit was the subject of a story I wrote for Newcity in February 1993.)

Much of Akinlana’s public art—including mural and relief commissions for airport terminals in Philadelphia, Denver, and Aurora, Colorado—as well as studio paintings have African spiritual themes, as befits a practicing voodoo priest. He says his art “is a form of cultural activism, where I try to contribute something holistic and positive, to open minds and eyes…and to counteract the negative forces in society.”

One negative force almost wiped him out. On August 29, 2005, as Hurricane Katrina took aim at the Gulf Coast, Marcus, Fatu, and their five kids—the oldest is now 12—evacuated to Alabama and then to Washington, DC. Blocks to the west, the London Avenue Canal levees and floodwalls breached in two places. Returning weeks later, he found that his Eastern Street home and studio had been swamped with six feet of water, and were caked in mud and mold. He lost nearly everything, including all his art and documentation—except what wasn’t at the gallery he co-owned in the French Quarter (which has since moved and is now called Galerie Cayenne). Determined, Akinlana reclaimed his brick two-story house. Using insurance money, and camping out in his yard, he gutted and renovated, eventually moving his family back in July 2006. The rebuilding effort in his Gentilly Terrace neighborhood is spotty and piecemeal, with many blighted homes.

Akinlana says that while he’s “grateful” for donations—clothes, furnishings, art supplies—“I try to think about Katrina as little as goddamn possible.” It had little effect on his artwork, except for some “raw” drawings in one of his sketchbooks. “It’s hard to get my ‘free-expression’ stuff out, when I got to make a living.” (He sells more tourist-oriented New Orleans scenes at his gallery.) 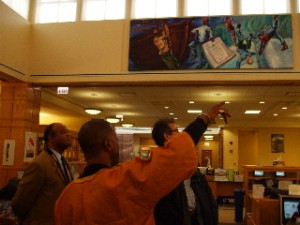 So the Chicago Public Art Program commission came at a fortuitous but “intense period in my life,” he says, thanking one-time collaborator and public art committee member Juan Chávez for suggesting him. It was one of two commissions Akinlana received just after the storm (the other was for the new Indianapolis Airport). To research, the avid reader plunged into books from the West Pullman Library; he returned several times to meet with library community members, crafting a piece about the art of storytelling.

The city exerted more control over content than Akinlana had anticipated. During public talks at the December 6 dedication, both he and library branch manager Dewana Dorsey acknowledged the difficulties—the “push and pull,” as Akinlana put it—of wrestling the imagery into shape. Not all the books and authors included in the original design made the cut due to budget limits, and what remained underwent revisions. For example, Bigger Thomas, the protagonist of Wright’s “Native Son,” is shown in his role as a chauffeur—and not fleeing from his crime.

Still, Akinlana elucidates how books, like art, can help change lives. “At the time I started this, I was definitely concerned about what I termed anti-intellectualism in American culture,” he says. “I was trying to encourage people to be excited about reading, which is a stepping-stone to…being an intellectual. I felt there was too much dumbing down, too much of a culture not seeking the truth.”