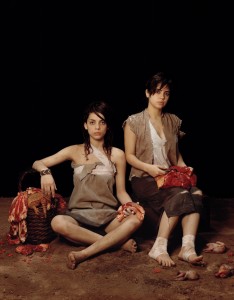 Argentinean photographers are always dependable when it comes to serving up the most visceral existential images to be found on the planet, and the four artists here do not disappoint. Res invites us to feast our eyes on two ragamuffins in tattered garb sitting on a dirt floor staring dolefully as they hold pieces of raw meat on their laps. Luis Gonzalez Palma takes us into a library, which is overstuffed with moldering volumes, at the center of which is a table in which two chairs are embedded so that no one could sit on them. Jorge Simes brings the “dead nature” tradition over the top with his image of wilted flowers graced with stamens in the form of skulls. Tatiana Parcero inscribes nude women’s bodies with pseudo-scientific diagrams of their chemistry and energy fluctuations. The lightest touch comes from Constanza Piaggio’s scenario in which a man sits on the floor of a music room with a dumbfounded expression on his lips, surrounded by various instruments and disordered sheets of music; he holds a cat carelessly, his telephone is off the hook, and a monkey’s head mocks him from the top of an organ. Existential overload can put a smile on your face. (Michael Weinstein)