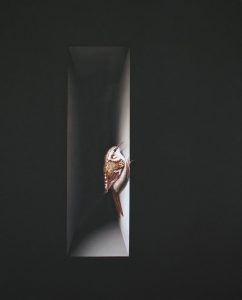 Isabelle du Toit paints butterflies, squirrels and birds with the meticulous detail classical masters once devoted to still lifes. But du Toit’s creatures, hailing from Africa, North and South America, are removed from the safety of their respective contexts and thrust into a contemporary limelight. An Eastern Bluebird, illuminated by an unseen spotlight, stares out at the viewer with beady eyes. The artist pays the same amount of attention to the bird’s background to achieve the opposite effect—the canvas is black and flat, dull and completely devoid of character. The placement of woodland creatures on this backdrop is disturbing—as it should be. Du Toit subtly emphasizes nature’s plight because of mankind’s encroachment. Her most recent paintings drive this point home with the inclusion of grey, trompe l’oeil recesses in which the animals are perched. While a beak or foot may stray out of confinement, it doesn’t appear as if the animal can leave its small alcove—and if it can, it has nowhere to go. Du Toit inserts other subject matter, often food, into this unknown limbo, including a single olive or a cupcake that’s lost its sprinkles. Illuminated against the black nothingness, the effect is anthropomorphic. A discarded banana peel, carefully composed, appears simultaneously humorous and forlorn. Gallery owner Byron Roche notes that the key to the pieces’ success is just the right amount of saccharine—the pieces are sweet, but “just a little bit uncomfortable.” (Patrice Connelly)