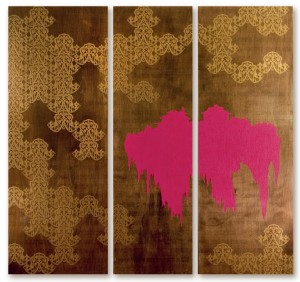 Melissa Dean skillfully negotiates a careful balance between the fantastic and the banal in her mixed-media artworks now on view at Peter Miller Gallery. Each piece hints at something psychosexual hiding behind the gloss of our favored consumer goods—epitomized for Dean by IKEA furniture.

Dean produces her work with what seems to be a graphic or industrial designer’s sensibility (and software), heightening their allure. Silhouettes of skylines and suburban households set the scene, while wiry outline images of domestic products sprawl across many works like varicose veins.

Dean’s work could very well serve as illustrations to a modern-day “The Yellow Wallpaper,” Charlotte Perkin Gilman’s classic 1892 short story about a woman confined to a patterned-wallpaper-clad bedroom and the character’s corresponding descent into hallucination and madness.

There is something (un)usual hiding within the laser-cut paper patterns Dean has designed and applied to many of her works produced on prefabricated doors. Electrical cords snake their way into coat-of-arms looking formations for “Coveting Hearth and Home,” and kitchenware, from forks to spatulas, punctuate the rather Ryan McGuinness-like amoeba forms applied to “HILF Island”—either a clever play on the hard to pronounce names of IKEA designs or a playful addition to the growing “‘X’ I’d Like to Fuck” lexicon. (Danny Orendorf)