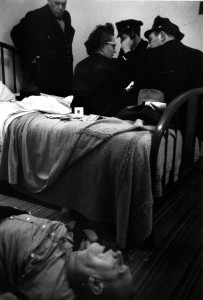 Now 90 years old and still kicking, Chicago-born photojournalist and social documentarian Wayne Miller covered World War II and its aftermath, including FDR’s funeral and the devastation of the nuclear bombing of Hiroshima, and then moved on to more intimate slices of life in series on the Bronzeville neighborhood and many other places, and collaboration with the “Family of Man” project, always with the intent to explain the human condition “through the eyes of others.” A man of his times, Miller brings us back to an era when photographers absorbed gritty existential skepticism and preserved their golden hearts, serving up film noir with a human face. Always edgy but never brutal, Miller’s sensibility is crystallized in his shot of San Francisco cops questioning a middle-age woman in a dingy room where a dead man lies on his back, his mouth gaping like a fish, next to an unkempt bed strewn with dollar bills. (Michael Weinstein)