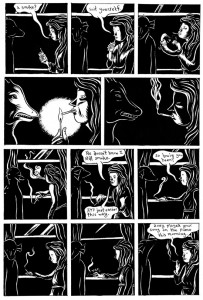 Lilli Carré flips through comics at a café in Ukrainian Village where she can often be seen leaning over a half-finished drawing, crowded by a laptop, a stack of pens, notebooks and an unfinished coffee. She had just released her first graphic novel this October with Fantagraphics Books, “The Lagoon,” and has a full-color comic, “The Carnival,” on the horizon, scheduled for release in the spring issue of Mome. In the midst of comic-book projects she’s working on a handful of illustration assignments, and while I want to ask her how she manages to find time enough to sleep, she pulls out a handful of zines she’s been working on.

Its only been three years since what started as a comics feature in a student paper, “The Tales of Woodsman Pete,” about a hermit who’s slowly losing his wits in the wilderness, was nominated for the Eisner award. This was shortly followed by the premiere of her animation, “How She Slept At Night,” at the Sundance Film Festival.

Still in her early twenties, Carré admits she didn’t think seriously about making comics until she moved to Chicago in 2002 to attend The School Of the Art Institute. There she had a chance to try her hand at writing, but by the end she says she was turning in illustrations to go along with her writing assignments, and started working on animations with experimental filmmaker Chris Sullivan. “He pointed out things to me about my stories that made me think about how I craft them in new ways. I just really respect him, his work, what he finds important in a story and it’s characters.”

But it wasn’t too long before Carré stumbled on the Holy Consumption group, (which includes Chicago’s comic-book artists Jeffrey Brown, Paul Hornschemeier, Anders Nielsen and John Hankiewicz). Drawn to Hankiewicz’s beautifully rendered but idiosyncratic stories, she admired the intuitive way in with he structured his narrative. “They follow their own logic,” Carré says, and “I was excited to come across such a unique and engaging book. I think Hankiewicz’s ‘Asthma’ is one of the best comics to come out in a while.”

Like Hankiewicz, Carré focuses on developing the moment rather than telling a particular story. She’s always resisted the straightforward front-to-back readings of a narrative. Her most recent release, “The Lagoon,” is an accumulation of a three-year process based on a short comic she wrote in the remote parts of Michigan. Carré has been writing and rewriting the story, which she says, “is in essence much closer to a poem than any sort of a novel.” 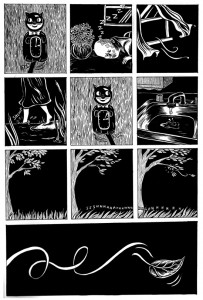 Drawn in black and white, Carré’s style and wit brings to mind early American sensibilities of comic book artists/animators like George Herriman or Winsor McCay. Inspired by early classic horror films, “The Night Hunter” and “The Creature from the Lagoon,” Carré admits she wanted to “try and make something similar, slow-paced and eerie, something that would simply let the water and the night hold their own in the story for a while.” The narrative revolves around a creature from the lagoon that comes to pay the family a visit each night. As each family member learns to deal with the song of the creature in his or her own way, the attention of the story shifts to focus on sound itself. The night resonates with sounds of snoring, clocks ticking and creaking floorboards that pick up pace with finger tapping and whistling. Each sets the tempo, pace and mood of the story but also define the characters relationship to the creature and to each other. Every character seems to be possessed by and aware of the sounds around them. Whether it’s the call of the wild, or the lure of the siren’s song, everyone has his or her own relationship to the call. Grandpa, like a cat in heat, whistles lounging in the flowerbed emptying the lot of every little petaled stem he sets his eyes on, the mother and father lured by the creature’s song disappear in the swamp, and the granddaughter, Zoey, learns to play the eerie tune on the piano.

Yet, the story of “The Lagoon” itself doesn’t resolve in a typical way—if it resolves at all—Carré admits she’d rather “leave the reader to make his own conclusions about the significance of this creature and its song based on how the family members relate to it and individually deal with this unknown thing that has dipped into their lives.” Take it as is, the book aims to give the reader something that they can pick up and read over and over, finding something new in it every time.

Lilli Carré signs copies of her new graphic novel “The Lagoon” at Quimby Bookstore, January 15, 7pm-8pm. She will also sell prints and various little handmade book items. On Tuesday, February 3, Lilli Carre and Alexander Stewart will be present for the MCA’s Work In Progress from 11 am-7 pm.