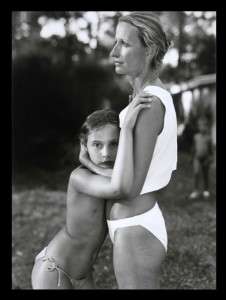 Jock Sturges’ luminous black-and-white sculptural yet flowing photographic portraits of naked girls who had accompanied their parents to nudist colonies incited notoriety and controversy two decades ago, when the FBI raided his studio on the grounds that he was purveying child pornography. Today we can look at his prints with a cooler eye and realize that most of his subjects were comfortable, self-possessed and individualized, and never presented themselves seductively, although a few were self-protective and ill at ease. Sturges’ classical formalist approach insures that his subjects appear to be drawn into themselves, even in group settings, and convey a sensibility of reflective pathos that is at the antipodes from conventional expectations about “naturism.” Relieved of the projection of moral passion, in any direction, girls represented after the manner of classical models are unlikely to raise many contemporary eyebrows. The show’s most powerful image is the single contribution of Robert Mapplethorpe—a late self-portrait rendered in gold leaf of the artist’s eyes staring with a deep and relentless intensity that issues a judgment of gravitas on Sturges’ photos that surround it. (Michael Weinstein)