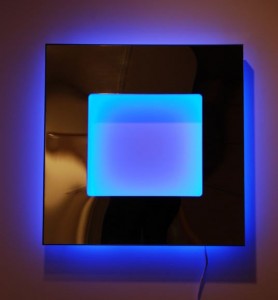 “Make Me an Offer” isn’t a response to the current economic crisis or the holidays, but serves as appropriate commentary on this money-tight commercial season. The show “challenges the ambiguity between commercial and fine arts,” implying that the artwork can be categorized as fine or commercial art and the viewer is asked to play a guessing game of which is which. If so, the gallery isn’t helping. Playing by its own rules, the “commercial” aspect can relate to any feature of the piece’s production, including the artist’s intent (to make money), the medium (paper towels-­a commercial product), or the artist’s day job (an engineer). Under these broad guidelines curators Lindsay Grace and Nancy Lu Rosenheim have gathered paintings, drawings, and found objects whose eclectic diversity is intriguing but makes it difficult for the pieces to relate to one another. Caroline Anderson’s “Confession Station” exhibits donated personal items accompanied by text documenting their significance. After the show the items, along with their “confessions,” will be sold on eBay. The viewer, unknowingly or knowingly, is not only studying artwork, but inspecting merchandise. The opposite is true for David Opie’s “Lost Robot,” a watercolor depicting a child discovering a discarded robot. The scene could be straight out of a children’s book, which Opie makes a living illustrating. Taken off the page and placed in the gallery, the image may be viewed as fine art. (Patrice Connelly)

[…] A show I co-curated reviewed on New City (not a positive review, but at least it landed on the Chicago art scene): https://art.newcity.com/2008/12/30/review-make-me-an-offergallery-350-illinois-institute-of-art/ […]