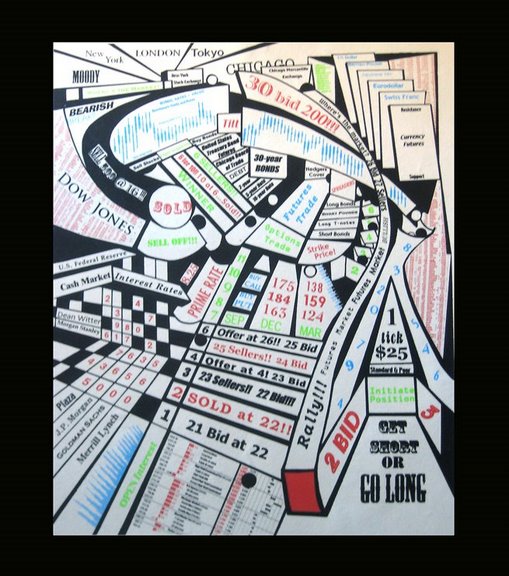 Tasked with considering “the personal, political and economic issues pertaining to the cultural currency of money,” the artists in “Money Money Money” present money as aesthetic object, money as karmic reward/retribution, money as palimpsest. A suitcase stuffed with twenties and a Wall Street Journal critical of the bailout is titled “Oops.” A bald eagle formed from dimes and pennies hangs above a birdseed altar. The phrase Buy or Die bathes a wall in blood-red neon light.

There are some compelling images here that get diluted by an over-reliance on parodic manipulations of dollar bills and other hard currency. The preponderance of rebus-like collage paintings combining various national currencies with other charged symbols quickly grow tiresome, especially when the “message” they impart isn’t especially insightful. The problem that faces juror Mary Jane Jacob and selected artists lies partly with the dematerialization of money itself. Paper money doesn’t hold the symbolic power it once did; today, invisible lines of credit seem more determinative of our fates. The U.S.’s shift away from a productive economy toward a purely speculative one tilts the concept of money even further towards the phantasmagoric, yet much of the work in the show feels ploddingly literal. Its most successful offerings—Daniel Mellis’ conjuring of signed artworks out of $20 cash, and Cheri Reif Naselli’s doomed attempts to reconstruct $10,000 worth of shredded currency, for example—rouse anxieties inherent in a multifarious global economy that may well have surpassed our ability to comprehend it. Performances by Mellis and Naselli occur every Saturday through the show’s run. (Claudine Isé)