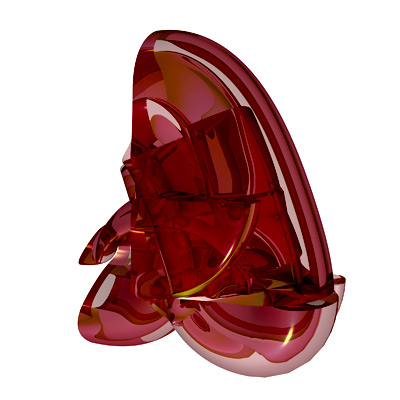 The letter "A" from Geoff Kaplan's "Incest" series, digital print

What is design but the decoration of meaning?—such that ‘good’ design is a fitting elaboration of subject matter. Words (perhaps these printed here) can be dressed to impress—Times New Roman—or be cloaked in perfect blankness—Helvetica, no doubt. But what if a serif were stretched beyond a flourish, and an italics jutted off the page, and punctuation spun on an axis too blindingly fast for the eye catch? Such formal fatuousness surely disservices the eager reader of words.

This problem, posed from the designer’s perspective, is treated in the exhibition “Dimension and Typography: A Survey of Letterforms in Space and Time,” co-curated by Jimmy Luu, a graphic design teacher at the University of Illinois at Urbana-Champaign, and Ryan Molloy, on the faculty at Eastern Michigan University. Luu and Molloy have assembled the typographic work of fifteen graphic designers in video, print, sculptural and computerized displays. Much of the work on view is highly experimental; they are the idea sketchbooks and conceptual counterpoints to real-world applications of graphic design.

The show’s theme takes its cue from J. Abbott Miller’s 1996 book “Dimensional Typography,” a celebrated study on how the common letter form has expanded off the flat page—in volume, space and time. Miller traces formalist approaches from Baroque-era floridity to the Bauhaus’ glorification of the machine in an age when the camera heightened the design world’s sense of light and shadow. The emergence of computational models at the end of the twentieth-century caps Miller’s thesis of typographic evolution. The new code-driven typography, largely initiated at the Massachusetts Institute of Design, fuses processing language with design vocabulary. Alphanumerics have been generated from random markings drawn by a program, some of which are on view in the exhibition. But perhaps more exciting is that these new letters live on the Internet in a share-friendly format where users can tweak them at will.

The unique computer esthetic is so new, though, that it can often be difficult to apply in useful situations. Imaginatively rendered letters, such as those from Geoff Kaplan’s “Incest” series, envision the known alphabet in sleek, translucent Transformer-like shapes. They are abstracted beyond easy recognition, perhaps only knowable when the digital prints are presented in a chart from A to Z. 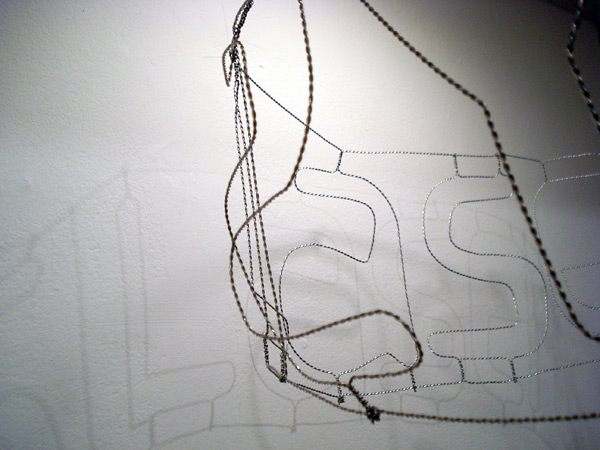 Like many pieces in the show, one sees the shape and structure of the letter before one can recognize its significance. It’s a bit like the gestalt process of language acquisition, where a child first encounters the world sensorily, grasping shiny shapes and color patches, and only later understands their names and rules. Kaplan’s digital renderings are abstract enough to potentially prompt momentary defamiliarization. At first the letters appear complex and strange, but they don’t mean more than what they say. A means A; it’s just a question of how A means A.

“Design lives in the world differently than fine art,” says co-curator Luu, such that good design doesn’t sit atop a pedestal waiting to be contemplated, but is instead immediately understood. We are users—not viewers—of signs, advertisements and books. That the exhibition does present typography in sculpted and abstract forms, much like fine art, and in a white cube art gallery, encourages a thoughtful approach far from the snap judgments provoked by some disposable consumer media. 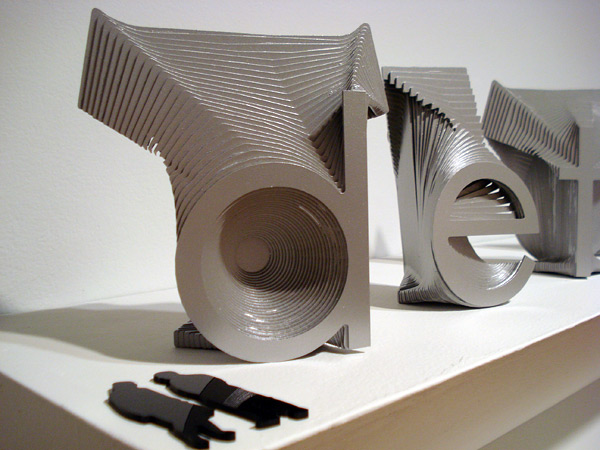 You’ll rarely find a designer’s signature in the corner of his or her work. Vernacular design may be expressive, but only expressive of its brand identity, not its maker. Increasingly, museums are beginning to collect and display the innovations and turning points in the design industry, from chairs to wallpaper to exhibition catalogues, and celebrity designers are emerging, identifiable by their style—itself a signature. The exhibition “Dimension and Typography,” which proudly announces the designers’ names, seeks to motivate the designer’s creative agency—but in a vacuum, without the input of a client. It’s hoped, though, that practical needs will catch up with innovation.

Luu is both an academic and a working designer, so he balances the theoretical and practical worlds of design. “Working with words,” he reflects, “the hard thing is that they have to say something.” How far can a designer push formal choices before alienating the subject matter—and become an artist? Luu is hopeful, though, that if the medium is the message, then perhaps it can contain its share of poetry and elegance.

After winning a public art commission in Austin, Texas, Luu installed the word “onward” in the turf outside the Health and Human Services Building using metal edging and planting the 30-foot letters with a different seed. As viewers interact with the landscape, they cannot read the word in total, but are able to witness the letters’ growth and fluctuations throughout the seasons. If message and form, object and idea, could always dynamically conflate in this way, we’d be well-versed in artful design.