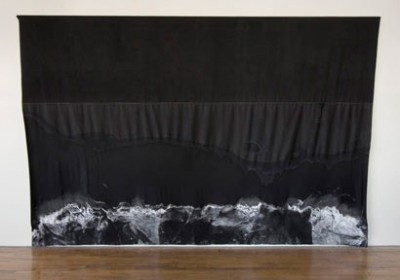 Dana Carter understands that if you stand still for long enough, the atmosphere around you will put on a show—however subtle, however ephemeral. But how might one capture it, collaborate with it or represent it as artwork?

The collection of mixed-media artworks Carter has on display at Devening Projects and Editions are largely shaped by her experiences during a residency in the desert of Carizozo, New Mexico. There, Carter experimented with light, landscape, fabric, minerals (salt and chalk) and their corrosive and generative traces.

As any of us tromping about the sidewalks of Chicago these days knows, salt crystallizes onto material, producing its own forms on your boots. Carter channels this phenomenon for “Extract from seven days in search of Orion Nebula” (2008), a heavy-duty black cloth treated with salt water that evokes a subtly gleaming mountain scene. 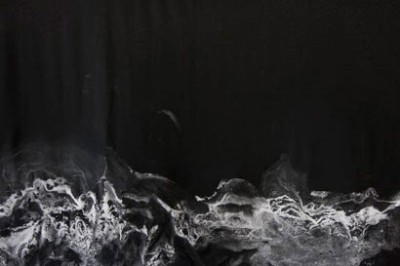 The exhibition’s keystone work is “Looking at you from the Very Large Array” (2008), an ode to New Mexico’s radio astronomy observatory. Carter re-presents footage from a sunlight-drawing experiment as a projected stop-motion digital film—just one element to the larger installation that includes a glass box on the floor to reflects images of radio telescopes. The piece offers a curious comment on the dissonance between human perception and imaging technologies, both artistic and scientific.

Carter’s concept is certainly compelling, but it’s difficult to fully perceive the artist’s interest in experimenting with the atmosphere while present in the gallery’s white-box, windowless exhibition space. This, ironically, may turn out to be the point. (Danny Orendorff)