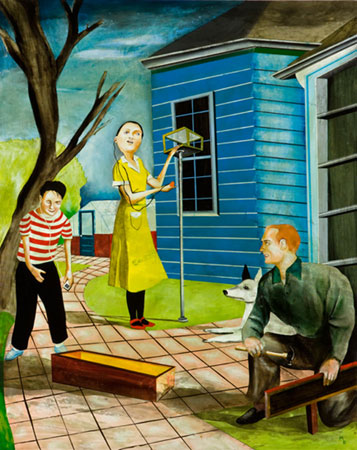 When looking at Matthew Dennison’s paintings, a viewer may get the feeling that something is slightly awry. The narrative scenes, depicting people in daily, normal routines both indoors and outdoors, do not outright defy reality, but skirt about its edges. The angles of the houses are just a bit off, the figures disproportioned with exaggerated characteristics, comprising a kind of surrealistic Americana—Norman Rockwell meets Eric Fischl. Dennison’s paintings, in both title and content, remain purposely ambiguous, refusing to commit to a specific time period or event. The exception is “Electric Car,” which depicts a happy-looking couple with a bright-yellow car in the foreground, while simplified wind turbines turn behind them. While the car and wind turbines refer to contemporary issues—especially of a serious nature—the generic, Caucasian couple looks as if they’re leaving their 1950s Levittown community to embark upon a picnic. This manufactured aspect carries through to Dennison’s other pieces with the addition of a layer of industrial-strength enamel paint. The result is a glossy, flat surface that Dennison manipulates to allow certain areas of the oil painting to show through. Look carefully and you’ll see most figures’ faces lack the enamel and glow from the oil painting underneath, an indication that not everything on the surface is all right. (Patrice Connelly)