The exhibition “Paper Trail” at Gallery 400 is not a typical art exhibition, and it doesn’t claim to be one. Instead, it recreates the gallery as a gathering place, bringing together ephemera, mostly photographs, newspapers and books, from the late 1960s and early seventies related to various American radical political groups. The hope—now that “hope” is in vogue again—is to have visitors consider solutions to social problems that have existed in Chicago for more than four decades.

What are these persisting problems from four decades ago? Consider Marvin Gaye’s 1970 sonic masterpiece, “What’s Going On.” Gaye sings, “Brother, brother there’s far too many of you dying”—still shamefully true as Chicago closed out 2008 with 507 homicides. “We don’t need to escalate, war is not the answer”—the US continues war on two fronts. “Don’t punish me with brutality”—unbelievably, police brutality is still a problem, a recent shocker being that a CPD officer beat a man handcuffed in a wheelchair.

The problems Gaye immortalized in song are given visual form here in a large group of anonymous and untitled photographs from about forty years ago. They display the visual history from the protest era; concerns about community welfare and livelihood, and efforts to abolish violence. There are images of communities organizing and banding together: a rally for a playground, children playing on bare asphalt and lots of speeches, protests and raised fists. Two images indicate that era’s racial solidarity against “The System” and “The Man.” In one, Black Panther Party co-founder Huey Newton strongly clenches a fellow radical’s hand. The other shows a press conference attended by both whites and blacks, and all are dressed in typical revolutionary gear of black berets and dark sunglasses. 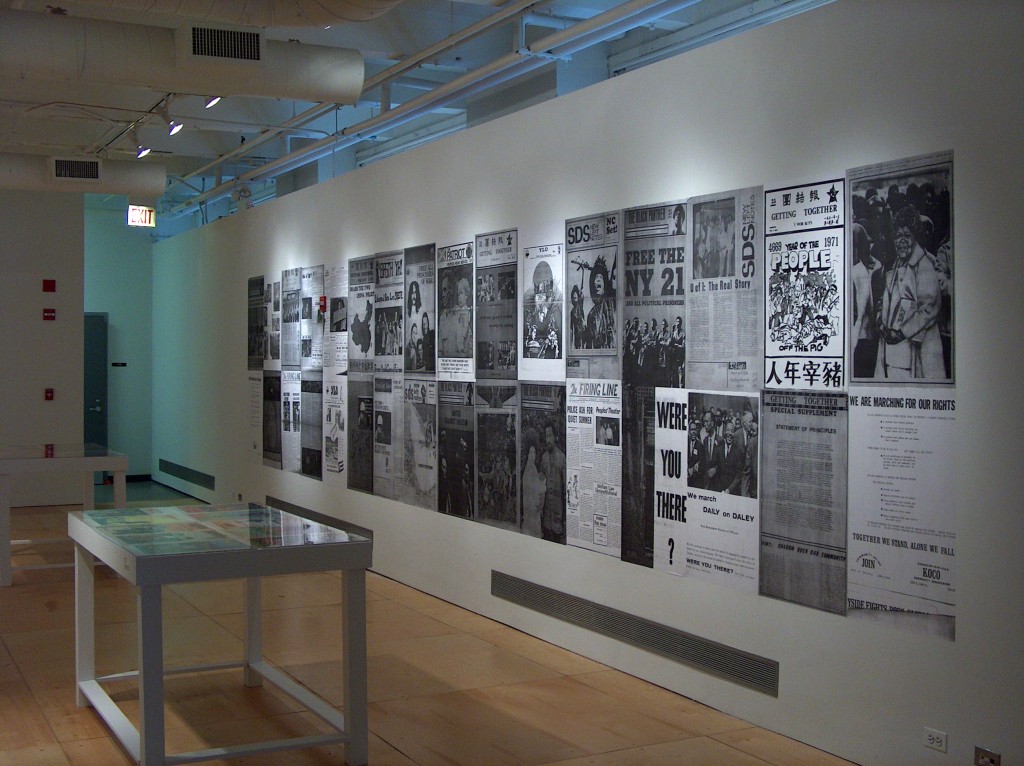 The underground newspapers of the time, Seed and The Black Panther Community News, featured artistic illustrations on their covers, and both are on view here. Whereas the designs for “Seed” were often psychedelic and anonymous, The Black Panther Community News featured work by Emory Douglas, Minister of Culture for the Black Panther Party from 1967-1980. Douglas was the subject of a retrospective at LA MOCA’s Pacific Design Center last year, and his images use photocollage techniques, certain elements of Chinese Communist propaganda and the artist’s own hand-drawn illustrations.

One of the most powerful images that Douglas created was a poster for the August 21, 1970, issue of Community News. Headed with the phrase, “We shall survive. Without a doubt,” the image depicts a brilliantly smiling young African-American child wearing glasses and, in place of lenses, are images of the young being educated—we assume in Black Panther community schools. Atop his head is a floppy, zoot-style hat, emanating red rays quoted directly from Chinese revolutionaries. Douglas’ consistent use of Communist propaganda techniques appropriates the galvanizing force of that style. Typically in the Chinese source images, one would see the red rays emanating from behind Mao, the leader, but in his works Douglas links them to the children, granting them agents of change. Douglas’ image posits hope and optimism in stark contrast to an era characterized by violence, racism and uncertainty. 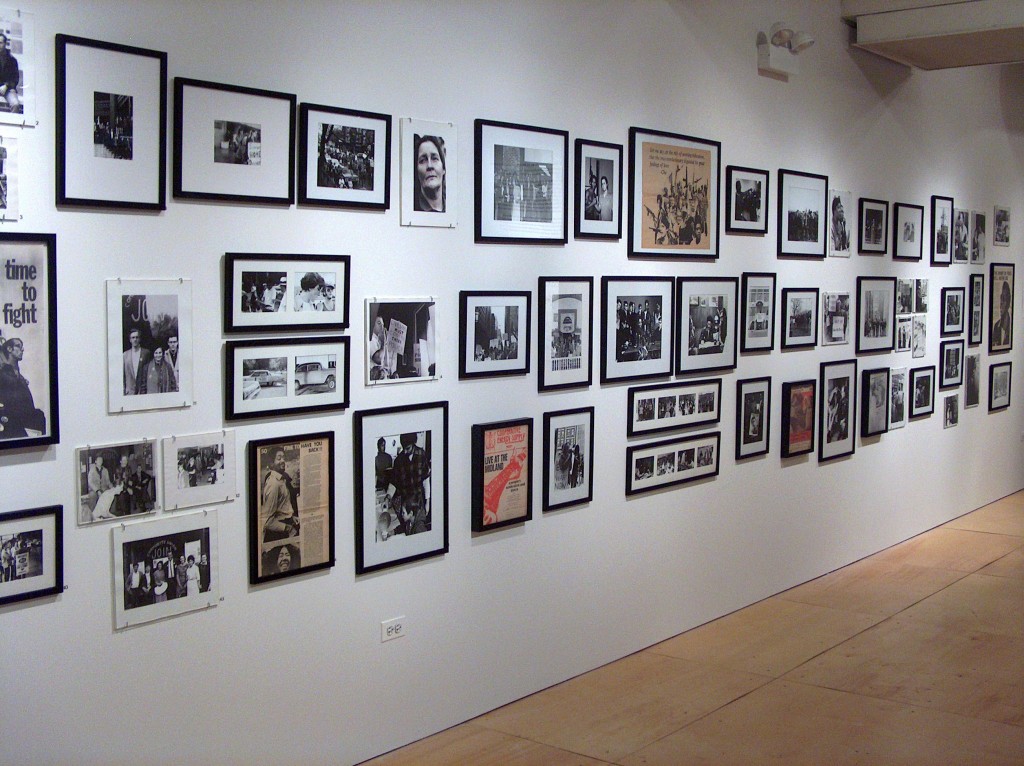 The children depicted in Douglas’ work, and in many other images throughout the exhibition, are an unexpectedly repetitious motif, yet they successfully invoke “the future.” With the election of Barack Obama, it would seem that one of the objectives from the 1960s has been fulfilled, but this exhibition shows us that individuals and communities have the power to affect change, perhaps even more so now that our leader speaks the same language. “Paper Trail” comes at a time to keep the momentum from the election-elation going, and explicitly cites issues of affordable housing, health care and poverty—all these battles need warriors.

“Paper Trail” takes the stance that, above all, education is central to solving these issues, and visitors are presented with a large, well-stocked reading room full of revolutionary and alternative literature. Here you can learn the history not told in school, such as the FBI’s COINTELPRO program, which was aimed at dismantling radical political organizations like the Black Panthers and the Latino Young Lords.

“Paper Trail” fits into an unofficial series of exhibitions that have taken place all over Chicago this past year, marking the fortieth anniversary of the radical sixties. Other exhibitions have focused successfully on the period’s art, such as the DePaul University Museum’s excellent “1968” exhibition and the University of Chicago’s “Looks Like Freedom,” so “Paper Trail” uses an educational strategy in line with AREA’s special issue, “1968/2008” which is available in the reading room. The exhibition’s approach relies on the initiative of the viewer to read the books and study the newspapers, which can be daunting because of the mass of materials on hand. But the creation of an historical continuum, alongside many of Chicago’s alternative organizations behind this exhibition, prompts us to create the future by learning from the past.