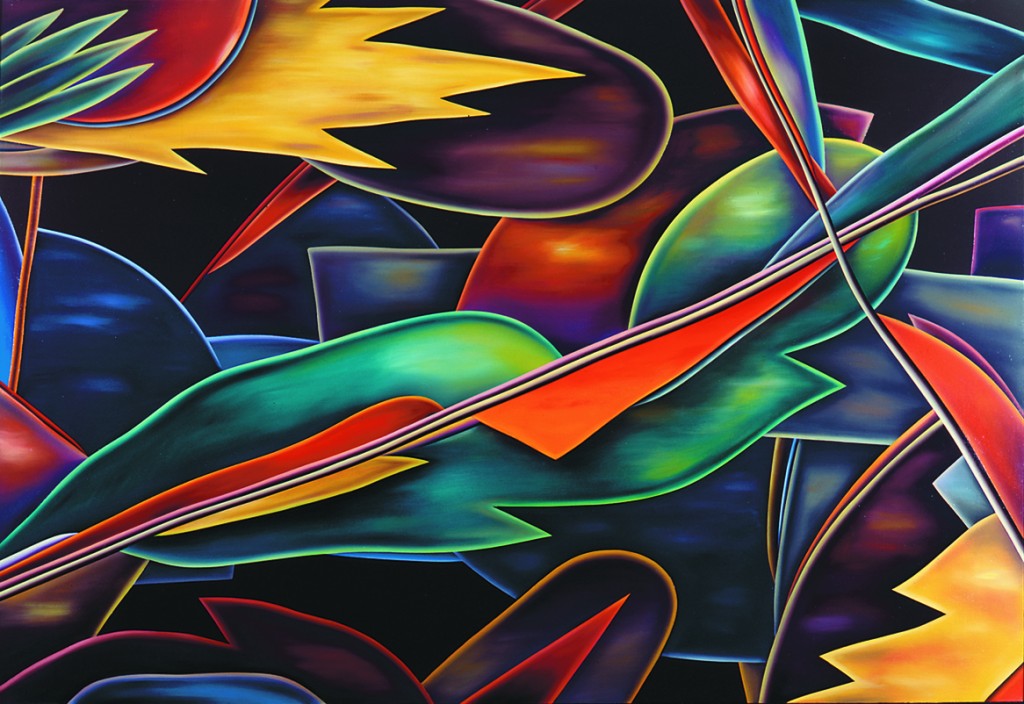 Abstract painting has had a long history in Chicago, with luminaries like Morris Barazani, Miyoko Ito, Moholy Nagy, Miklos Gaspar, Charles Biederman, going all the way back to the Armory Show in 1913. Manierre Dawson, who had traveled to Europe, was the first to bring the new ideas home to Chicago galleries, and the Palette and  Chisel Club sponsored the “Abstract Show” of 1915—even if it was only a semi-serious event. Few Chicago artists took up the new approach because there was no money in it, while illustrators could earn as much as movie stars. Among those early abstract painters, Dawson returned to Michigan to become a successful farmer.

It wasn’t until universities began their own art schools, and Ab-Ex flooded the art world, that abstract painting could be considered a practical career option—and this was  the path chosen by William Conger in the late 1950s. He found an early mentor in Chicago abstract painter Raymond Jonson, who had moved to New Mexico by that time,  and later in Elaine DeKooning. Their transcendent, formal approaches were dramatically different from the “monster roster” of Chicago Imagists of that decade, and are still  reflected in Conger’s work, although he has gone in his own, unique direction.

Conger also began his career in academia at this time, taking an MFA at the University of Chicago, and began a lifelong interest in the methods and institutions of  academic study. In 1971 he returned to Chicago as chair of the Art and Art History Department at DePaul University, and in 1984 moved up to Northwestern where  eventually he would chair the Department of Art and Art Theory.

How does a stellar career in academia impact the life of an artist? Is it somehow connected to all those frightening, high-tech, aggressive images of Conger’s work in the  1980s and ’90s? Maybe, maybe not, but at least it has led him to become immersed in the theoretical literature of contemporary art, and encouraged him to become an  articulate voice in that field. An extensive interview can be found online at geoform.net, and if you actually want to talk with him, he’s been holding forth daily on the  aesthetics-l listserv for almost a decade.

Conger practices and advocates painting that is allusive: “The important thing for me is to make paintings that exist somewhere between actual depiction and complete abstraction,” he says, so that they can serve as “surrogates or metaphors of selfness—layered metaphors of self-imagining” in a style that critic Donald Kuspit now calls “Fantastic Abstraction,” as it asserts “the repressed psychic reality” of living in America. (Although it also strongly resembles the Bauhaus period of Kandinsky.) The artist Lorser Feitelson had said much the same thing about his own paintings from 1950-51 as a “configuration that for me metaphorically expresses the deep disturbance of our time”—and it’s interesting to compare the discomfort of Feitelson’s Los Angeles with the ominous visions of Conger’s Chicago.

Whether “Fantastic Abstraction” will stick around as a Chicago style remains to be seen. Despite his four decades of teaching, Conger has few followers, and the “repressed psychic realities” of younger artists don’t seem to require Conger’s brand of meticulous craftsmanship and formalist credentials. He may just be an historical anomaly, an outsider on the inside. (Chris Miller)

William Conger, Paintings: 1958-2008, shows at the Chicago Cultural Center, 78 E. Washington, through March 24, and at Roy Boyd Gallery through March 3.